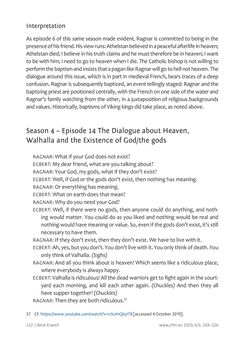 Interpretation As episode 6 of this same season made evident, Ragnar is committed to being in the presence of his friend. His view runs: Athelstan believed in a peaceful afterlife in heaven; Athelstan died; I believe in his truth claims and he must therefore be in heaven; I want to be with him; I need to go to heaven when I die. The Catholic bishop is not willing to perform the baptism and insists that a pagan like Ragnar will go to hell not heaven. The dialogue around this issue, which is in part in medieval French, bears traces of a deep confusion. Ragnar is subsequently baptized, an event tellingly staged: Ragnar and the baptizing priest are positioned centrally, with the French on one side of the water and Ragnar’s family watching from the other, in a juxtaposition of religious backgrounds and values. Historically, baptisms of Viking kings did take place, as noted above. Season 4 – Episode 14 The Dialogue about Heaven, Walhalla and the Existence of God/the gods RAGNAR: What if your God does not exist? ECBERT: My dear friend, what are you talking about? RAGNAR: Your God, my gods, what if they don’t exist? ECBERT: Well, if God or the gods don’t exist, then nothing has meaning. RAGNAR: Or everything has meaning. ECBERT: What on earth does that mean? RAGNAR: Why do you need your God? ECBERT: Well, if there were no gods, then anyone could do anything, and noth- ing would matter. You could do as you liked and nothing would be real and nothing would have meaning or value. So, even if the gods don’t exist, it’s still necessary to have them. RAGNAR: If they don’t exist, then they don’t exist. We have to live with it. ECBERT: Ah, yes, but you don’t. You don’t live with it. You only think of death. You only think of Valhalla. (Sighs) RAGNAR: And all you think about is heaven! Which seems like a ridiculous place, where everybody is always happy. ECBERT: Valhalla is ridiculous! All the dead warriors get to fight again in the court- yard each morning, and kill each other again. (Chuckles) And then they all have supper together! (Chuckles) RAGNAR: Then they are both ridiculous.37 37 Cf. https://www.youtube.com/watch?v=n3cimQ6yIT8 [accessed 4 October 2019]. 122 | René Erwich www.jrfm.eu 2020, 6/1, 103–126
zurück zum  Buch JRFM - Journal Religion Film Media, Band 06/01"
JRFM Journal Religion Film Media, Band 06/01