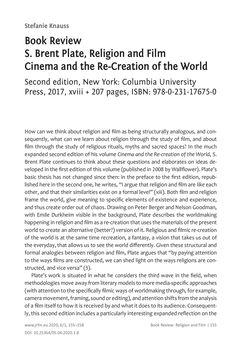 Stefanie Knauss Book Review S. Brent Plate, Religion and Film Cinema and the Re-Creation of the World Second edition, New York: Columbia University Press, 2017, xviii + 207 pages, ISBN: 978-0-231-17675-0 How can we think about religion and film as being structurally analogous, and con- sequently, what can we learn about religion through the study of film, and about film through the study of religious rituals, myths and sacred spaces? In the much expanded second edition of his volume Cinema and the Re-creation of the World, S. Brent Plate continues to think about these questions and elaborates on ideas de- veloped in the first edition of this volume (published in 2008 by Wallflower). Plate’s basic thesis has not changed since then: in the preface to the first edition, repub- lished here in the second one, he writes, “I argue that religion and film are like each other, and that their similarities exist on a formal level” (xiii). Both film and religion frame the world, give meaning to specific elements of existence and experience, and thus create order out of chaos. Drawing on Peter Berger and Nelson Goodman, with Emile Durkheim visible in the background, Plate describes the worldmaking happening in religion and film as a re-creation that uses the materials of the present world to create an alternative (better?) version of it. Religious and filmic re-creation of the world is at the same time recreation, a fantasy, a vision that takes us out of the everyday, that allows us to see the world differently. Given these structural and formal analogies between religion and film, Plate argues that “by paying attention to the ways films are constructed, we can shed light on the ways religions are con- structed, and vice versa” (3). Plate’s work is situated in what he considers the third wave in the field, when methodologies move away from literary models to more media-specific approaches (with attention to the specifically filmic ways of worldmaking through, for example, camera movement, framing, sound or editing), and attention shifts from the analysis of a film itself to how it is received by and what it does to its audience. Consequent- ly, this second edition includes a particularly interesting expanded reflection on the DOI: 10.25364/05.06:2020.1.8 Book Review: Religion and Film | 155www.jrfm.eu 2020, 6/1, 155–158
zurück zum  Buch JRFM - Journal Religion Film Media, Band 06/01"
JRFM Journal Religion Film Media, Band 06/01