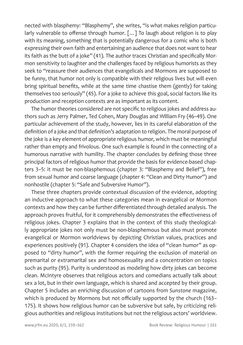 nected with blasphemy: “Blasphemy”, she writes, “is what makes religion particu- larly vulnerable to offense through humor. […] To laugh about religion is to play with its meaning, something that is potentially dangerous for a comic who is both expressing their own faith and entertaining an audience that does not want to hear its faith as the butt of a joke” (41). The author traces Christian and specifically Mor- mon sensitivity to laughter and the challenges faced by religious humorists as they seek to “reassure their audiences that evangelicals and Mormons are supposed to be funny, that humor not only is compatible with their religious lives but will even bring spiritual benefits, while at the same time chastise them (gently) for taking themselves too seriously” (45). For a joke to achieve this goal, social factors like its production and reception contexts are as important as its content. The humor theories considered are not specific to religious jokes and address au- thors such as Jerry Palmer, Ted Cohen, Mary Douglas and William Fry (46–49). One particular achievement of the study, however, lies in its careful elaboration of the definition of a joke and that definition’s adaptation to religion. The moral purpose of the joke is a key element of appropriate religious humor, which must be meaningful rather than empty and frivolous. One such example is found in the connecting of a humorous narrative with humility. The chapter concludes by defining those three principal factors of religious humor that provide the basis for evidence-based chap- ters 3–5: it must be non-blasphemous (chapter 3: “Blasphemy and Belief”), free from sexual humor and coarse language (chapter 4: “Clean and Dirty Humor”) and nonhostile (chapter 5: “Safe and Subversive Humor”). These three chapters provide contextual discussion of the evidence, adopting an inductive approach to what these categories mean in evangelical or Mormon contexts and how they can be further differentiated through detailed analysis. The approach proves fruitful, for it comprehensibly demonstrates the effectiveness of religious jokes. Chapter 3 explains that in the context of this study theological- ly appropriate jokes not only must be non-blasphemous but also must promote evangelical or Mormon worldviews by depicting Christian values, practices and experiences positively (91). Chapter 4 considers the idea of “clean humor” as op- posed to “dirty humor”, with the former requiring the exclusion of material on premarital or extramarital sex and homosexuality and a concentration on topics such as purity (95). Purity is understood as modeling how dirty jokes can become clean. McIntyre observes that religious actors and comedians actually talk about sex a lot, but in their own language, which is shared and accepted by their group. Chapter 5 includes an enriching discussion of cartoons from Sunstone magazine, which is produced by Mormons but not officially supported by the church (163– 175). It shows how religious humor can be subversive but safe, by criticizing reli- gious authorities and religious institutions but not the religious actors’ worldview. Book Review: Religious Humour | 161www.jrfm.eu 2020, 6/1, 159–162
zurück zum  Buch JRFM - Journal Religion Film Media, Band 06/01"
JRFM Journal Religion Film Media, Band 06/01