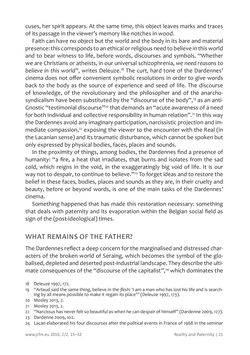 Reality and Paternity | 21www.jrfm.eu 2016, 2/2, 15–32 cuses, her spirit appears. At the same time, this object leaves marks and traces of its passage in the viewer’s memory like notches in wood. Faith can have no object but the world and the body in its bare and material presence: this corresponds to an ethical or religious need to believe in this world and to bear witness to life, before words, discourses and symbols. “Whether we are Christians or atheists, in our universal schizophrenia, we need reasons to believe in this world”, writes Deleuze.18 The curt, hard tone of the Dardennes’ cinema does not offer convenient symbolic resolutions in order to give words back to the body as the source of experience and seed of life. The discourse of knowledge, of the revolutionary and the philosopher and of the anarcho- syndicalism have been substituted by the “discourse of the body”,19 as an anti- Gnostic “testimonial discourse”20 that demands an “acute awareness of a need for both individual and collective responsibility in human relation”.21 In this way the Dardennes avoid any imaginary participation, narcissistic projection and im- mediate compassion,22 exposing the viewer to the encounter with the Real (in the Lacanian sense) and its traumatic disturbance, which cannot be spoken but only expressed by physical bodies, faces, places and sounds. In the proximity of things, among bodies, the Dardennes find a presence of humanity: “a fire, a heat that irradiates, that burns and isolates from the sad cold, which reigns in the void, in the exaggeratingly big void of life. It is our way not to despair, to continue to believe.”23 To forget ideas and to restore the belief in these faces, bodies, places and sounds as they are, in their cruelty and beauty, before or beyond words, is one of the main tasks of the Dardennes’ cinema. Something happened that has made this restoration necessary: something that deals with paternity and its evaporation within the Belgian social field as sign of the (post-ideological) times. WHAT REMAINS OF THE FATHER? The Dardennes reflect a deep concern for the marginalised and distressed char- acters of the broken world of Seraing, which becomes the symbol of the glo- balised, depleted and deserted post-industrial landscape. They describe the ulti- mate consequences of the “discourse of the capitalist”,24 which dominates the 18 Deleuze 1997, 172. 19 “Artaud said the same thing, believe in the flesh: ‘I am a man who has lost his life and is search- ing by all means possible to make it regain its place’” (Deleuze 1997, 173). 20 Mosley 2013, 2. 21 Mosley 2013, 2. 22 “Narcissus has never felt so beautiful as when he can despair of himself” (Dardenne 2009, 127). 23 Dardenne 2009, 102. 24 Lacan elaborated his four discourses after the political events in France of 1968 in the seminar
zurück zum  Buch JRFM - Journal Religion Film Media, Band 02/02"
JRFM Journal Religion Film Media, Band 02/02