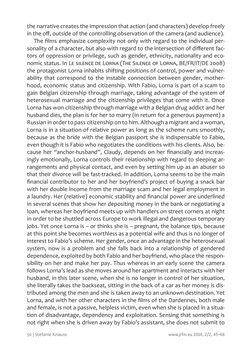 50 | Stefanie Knauss www.jrfm.eu 2016, 2/2, 45–66 the narrative creates the impression that action (and characters) develop freely in the off, outside of the controlling observation of the camera (and audience). The films emphasize complexity not only with regard to the individual per- sonality of a character, but also with regard to the intersection of different fac- tors of oppression or privilege, such as gender, ethnicity, nationality and eco- nomic status. In Le silence de Lorna (The Silence of Lorna, BE/FR/IT/DE 2008) the protagonist Lorna inhabits shifting positions of control, power and vulner- ability that correspond to the instable connection between gender, mother- hood, economic status and citizenship. With Fabio, Lorna is part of a scam to gain Belgian citizenship through marriage, taking advantage of the system of heterosexual marriage and the citizenship privileges that come with it. Once Lorna has won citizenship through marriage with a Belgian drug addict and her husband dies, the plan is for her to marry (in return for a generous payment) a Russian in order to pass citizenship on to him. Although a migrant and a woman, Lorna is in a situation of relative power as long as the scheme runs smoothly, because as the bride with the Belgian passport she is indispensable to Fabio, even though it is Fabio who negotiates the conditions with his clients. Also, be- cause her “anchor-husband”, Claudy, depends on her financially and increas- ingly emotionally, Lorna controls their relationship with regard to sleeping ar- rangements and physical contact, and even by setting him up as an abuser so that their divorce will be fast-tracked. In addition, Lorna seems to be the main financial contributor to her and her boyfriend’s project of buying a snack bar with her double income from the marriage scam and her legal employment in a laundry. Her (relative) economic stability and financial power are underlined in several scenes that show her depositing money in the bank or negotiating a loan, whereas her boyfriend meets up with handlers on street corners at night in order to be shuttled across Europe to work illegal and dangerous temporary jobs. Yet once Lorna is – or thinks she is – pregnant, the balance tips, because at this point she becomes worthless as a potential wife and thus is no longer of interest to Fabio’s scheme. Her gender, once an advantage in the heterosexual system, now is a problem and she falls back into a relationship of gendered dependence, exploited by both Fabio and her boyfriend, who place the respon- sibility on her and make her pay. Thus whereas in an early scene the camera follows Lorna’s lead as she moves around her apartment and interacts with her husband, in this later scene, when she is no longer in control of her situation, she literally takes the backseat, sitting in the back of a car as her money is dis- tributed among the men and she is taken away to an unknown destination. Yet Lorna, and with her other characters in the films of the Dardennes, both male and female, is not a passive, helpless victim, even when she is placed in a situa- tion of disadvantage, dependency and exploitation. Sensing that something is not right when she is driven away by Fabio’s assistant, she does not submit to
zurück zum  Buch JRFM - Journal Religion Film Media, Band 02/02"
JRFM Journal Religion Film Media, Band 02/02