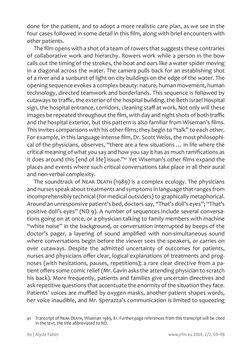 80 | Alyda Faber www.jrfm.eu 2016, 2/2, 69–98 done for the patient, and to adopt a more realistic care plan, as we see in the four cases followed in some detail in this film, along with brief encounters with other patients. The film opens with a shot of a team of rowers that suggests these contraries of collaborative work and hierarchy. Rowers work while a person in the bow calls out the timing of the strokes, the boat and oars like a water spider moving in a diagonal across the water. The camera pulls back for an establishing shot of a river and a sunburst of light on city buildings on the edge of the water. The opening sequence evokes a complex beauty: nature, human movement, human technology, directed teamwork and borderlands. This sequence is followed by cutaways to traffic, the exterior of the hospital building, the Beth Israel Hospital sign, the hospital entrance, corridors, cleaning staff at work. Not only will these images be repeated throughout the film, with day and night shots of both traffic and the hospital exterior, but this pattern is also familiar from Wiseman’s films. This invites comparisons with his other films; they begin to “talk” to each other. For example, in this language-intense film, Dr. Scott Weiss, the most philosophi- cal of the physicians, observes, “there are a few situations … in life where the critical meaning of what you say and how you say it has as much ramifications as it does around this [end of life] issue.”41 Yet Wiseman’s other films expand the places and events where such critical conversations take place in all their aural and non-verbal complexity. The soundtrack of Near Death (1989) is a complex ecology. The physicians and nurses speak about treatments and symptoms in language that ranges from incomprehensibly technical (for medical outsiders) to graphically metaphorical. Around an unresponsive patient’s bed, doctors say, “That’s doll’s eyes”; “That’s positive doll’s eyes” (ND 9). A number of sequences include several conversa- tions going on at once, or a physician talking to family members with machine “white noise” in the background, or conversation interrupted by beeps of the doctor’s pager, a layering of sound amplified with non-simultaneous sound where conversations begin before the viewer sees the speakers, or carries on over cutaways. Despite the admitted uncertainty of outcomes for patients, nurses and physicians offer clear, logical explanations of treatments and prog- noses (with hesitations, pauses, repetitions); a rare clear directive from a pa- tient offers some comic relief (Mr. Gavin asks the attending physician to scratch his back). More frequently, patients and families give uncertain directives and ask repetitive questions that accentuate the enormity of the situation they face. Patients’ voices are muffled by oxygen masks, another patient shapes words, her voice inaudible, and Mr. Sperazza’s communication is limited to squeezing 41 Transcript of Near Death, Wiseman 1989, 81. Further page references from this transcript will be cited in the text, the title abbreviated to ND.
zurück zum  Buch JRFM - Journal Religion Film Media, Band 02/02"
JRFM Journal Religion Film Media, Band 02/02