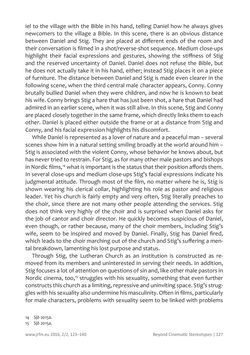 Beyond Cinematic Stereotypes | 127www.jrfm.eu 2016, 2/2, 123–140 iel to the village with the Bible in his hand, telling Daniel how he always gives newcomers to the village a Bible. In this scene, there is an obvious distance between Daniel and Stig. They are placed at different ends of the room and their conversation is filmed in a shot/reverse-shot sequence. Medium close-ups highlight their facial expressions and gestures, showing the stiffness of Stig and the reserved uncertainty of Daniel. Daniel does not refuse the Bible, but he does not actually take it in his hand, either; instead Stig places it on a piece of furniture. The distance between Daniel and Stig is made even clearer in the following scene, when the third central male character appears, Conny. Conny brutally bullied Daniel when they were children, and now he is known to beat his wife. Conny brings Stig a hare that has just been shot, a hare that Daniel had admired in an earlier scene, when it was still alive. In this scene, Stig and Conny are placed closely together in the same frame, which directly links them to each other. Daniel is placed either outside the frame or at a distance from Stig and Conny, and his facial expression highlights his discomfort. While Daniel is represented as a lover of nature and a peaceful man – several scenes show him in a natural setting smiling broadly at the world around him – Stig is associated with the violent Conny, whose behavior he knows about, but has never tried to restrain. For Stig, as for many other male pastors and bishops in Nordic films,14 what is important is the status that their position affords them. In several close-ups and medium close-ups Stig’s facial expressions indicate his judgmental attitude. Through most of the film, no matter where he is, Stig is shown wearing his clerical collar, highlighting his role as pastor and religious leader. Yet his church is fairly empty and very often, Stig literally preaches to the choir, since there are not many other people attending the services. Stig does not think very highly of the choir and is surprised when Daniel asks for the job of cantor and choir director. He quickly becomes suspicious of Daniel, even though, or rather because, many of the choir members, including Stig’s wife, seem to be inspired and moved by Daniel. Finally, Stig has Daniel fired, which leads to the choir marching out of the church and Stig’s suffering a men- tal breakdown, lamenting his lost purpose and status. Through Stig, the Lutheran Church as an institution is constructed as re- moved from its members and uninterested in serving their needs. In addition, Stig focuses a lot of attention on questions of sin and, like other male pastors in Nordic cinema, too,15 struggles with his sexuality, something that even further constructs this church as a limiting, repressive and uninviting space. Stig’s strug- gles with his sexuality also undermine his masculinity. Often in films, particularly for male characters, problems with sexuality seem to be linked with problems 14 Sjö 2015a. 15 Sjö 2015a.
zurück zum  Buch JRFM - Journal Religion Film Media, Band 02/02"
JRFM Journal Religion Film Media, Band 02/02