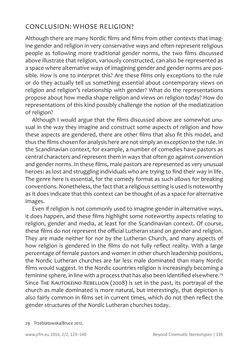 Beyond Cinematic Stereotypes | 135www.jrfm.eu 2016, 2/2, 123–140 CONCLUSION: WHOSE RELIGION? Although there are many Nordic films and films from other contexts that imag- ine gender and religion in very conservative ways and often represent religious people as following more traditional gender norms, the two films discussed above illustrate that religion, variously constructed, can also be represented as a space where alternative ways of imagining gender and gender norms are pos- sible. How is one to interpret this? Are these films only exceptions to the rule or do they actually tell us something essential about contemporary views on religion and religion’s relationship with gender? What do the representations propose about how media shape religion and views on religion today? How do representations of this kind possibly challenge the notion of the mediatization of religion? Although I would argue that the films discussed above are somewhat unu- sual in the way they imagine and construct some aspects of religion and how these aspects are gendered, there are other films that also fit this model, and thus the films chosen for analysis here are not simply an exception to the rule. In the Scandinavian context, for example, a number of comedies have pastors as central characters and represent them in ways that often go against convention and gender norms. In these films, male pastors are represented as very unusual heroes: as lost and struggling individuals who are trying to find their way in life. The genre here is essential, for the comedy format as such allows for breaking conventions. Nonetheless, the fact that a religious setting is used is noteworthy as it does indicate that this context can be thought of as a space for alternative images. Even if religion is not commonly used to imagine gender in alternative ways, it does happen, and these films highlight some noteworthy aspects relating to religion, gender and media, at least for the Scandinavian context. Of course, these films do not represent the official Lutheran stand on gender and religion. They are made neither for nor by the Lutheran Church, and many aspects of how religion is gendered in the films do not fully reflect reality. With a large percentage of female pastors and women in other church leadership positions, the Nordic Lutheran churches are far less male dominated than many Nordic films would suggest. In the Nordic countries religion is increasingly becoming a feminine sphere, in line with a process that has also been identified elsewhere.29 Since The Kautokeino Rebellion (2008) is set in the past, its portrayal of the church as male dominated is more natural, but interestingly, that depiction is also fairly common in films set in current times, which do not then reflect the gender structures of the Nordic Lutheran churches today. 29 Trzebiatowska/Bruce 2012.
zurück zum  Buch JRFM - Journal Religion Film Media, Band 02/02"
JRFM Journal Religion Film Media, Band 02/02