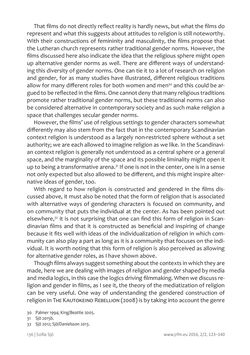 136 | Sofia Sjö www.jrfm.eu 2016, 2/2, 123–140 That films do not directly reflect reality is hardly news, but what the films do represent and what this suggests about attitudes to religion is still noteworthy. With their constructions of femininity and masculinity, the films propose that the Lutheran church represents rather traditional gender norms. However, the films discussed here also indicate the idea that the religious sphere might open up alternative gender norms as well. There are different ways of understand- ing this diversity of gender norms. One can tie it to a lot of research on religion and gender, for as many studies have illustrated, different religious traditions allow for many different roles for both women and men30 and this could be ar- gued to be reflected in the films. One cannot deny that many religious traditions promote rather traditional gender norms, but these traditional norms can also be considered alternative in contemporary society and as such make religion a space that challenges secular gender norms. However, the films’ use of religious settings to gender characters somewhat differently may also stem from the fact that in the contemporary Scandinavian context religion is understood as a largely non-restricted sphere without a set authority; we are each allowed to imagine religion as we like. In the Scandinavi- an context religion is generally not understood as a central sphere or a general space, and the marginality of the space and its possible liminality might open it up to being a transformative arena.31 If one is not in the center, one is in a sense not only expected but also allowed to be different, and this might inspire alter- native ideas of gender, too. With regard to how religion is constructed and gendered in the films dis- cussed above, it must also be noted that the form of religion that is associated with alternative ways of gendering characters is focused on community, and on community that puts the individual at the center. As has been pointed out elsewhere,32 it is not surprising that one can find this form of religion in Scan- dinavian films and that it is constructed as beneficial and inspiring of change because it fits well with ideas of the individualization of religion in which com- munity can also play a part as long as it is a community that focuses on the indi- vidual. It is worth noting that this form of religion is also perceived as allowing for alternative gender roles, as I have shown above. Though films always suggest something about the contexts in which they are made, here we are dealing with images of religion and gender shaped by media and media logics, in this case the logics driving filmmaking. When we discuss re- ligion and gender in films, as I see it, the theory of the mediatization of religion can be very useful. One way of understanding the gendered construction of religion in The Kautokeino Rebellion (2008) is by taking into account the genre 30 Palmer 1994; King/Beattie 2005. 31 Sjö 2015b. 32 Sjö 2012; Sjö/Danielsson 2013.
zurück zum  Buch JRFM - Journal Religion Film Media, Band 02/02"
JRFM Journal Religion Film Media, Band 02/02