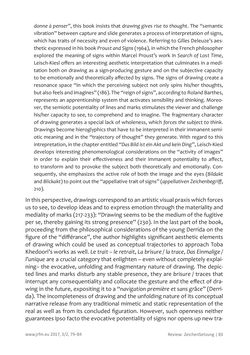 Review: ZeichenSetzung | 83www.jrfm.eu 2017, 3/2, 79–84 donne à penser”, this book insists that drawing gives rise to thought. the “semantic vibration” between capture and slide generates a process of interpretation of signs, which has traits of necessity and even of violence. referring to Gilles deleuze’s aes- thetic expressed in his book Proust and Signs (1964), in which the french philosopher explored the meaning of signs within Marcel Proust’s work In Search of Lost Time, Leisch-Kiesl offers an interesting aesthetic interpretation that culminates in a medi- tation both on drawing as a sign-producing gesture and on the subjective capacity to be emotionally and theoretically affected by signs. The signs of drawing create a resonance space “in which the perceiving subject not only spins his/her thoughts, but also feels and imagines” (186). the “reign of signs”, according to roland Barthes, represents an apprenticeship system that activates sensibility and thinking. Moreo- ver, the semiotic potentiality of lines and marks stimulates the viewer and challenge his/her capacity to see, to comprehend and to imagine. the fragmentary character of drawing generates a special lack of wholeness, which forces the subject to think. drawings become hieroglyphics that have to be interpreted in their immanent semi- otic meaning and in the “trajectory of thought” they generate. With regard to this intrepretation, in the chapter entitled “Das Bild ist ein Akt und kein Ding”, Leisch-Kiesl develops interesting phenomenological considerations on the “activity of images” in order to explain their effectiveness and their immanent potentiality to affect, to transform and to provoke the subject both theoretically and emotionally. Con- sequently, she emphasizes the active role of both the image and the eyes (Bildakt and Blickakt) to point out the “appellative trait of signs” (appellativen Zeichenbegriff, 210). in this perspective, drawings correspond to an artistic visual praxis which forces us to see, to develop ideas and to express emotion through the materiality and mediality of marks (217-233): “drawing seems to be the medium of the fugitive per se, thereby gaining its strong presence” (230). in the last part of the book, proceeding from the philosophical considerations of the young derrida on the figure of the “différance”, the author highlights significant aesthetic elements of drawing which could be used as conceptual trajectories to approach Toba Khedoori’s works as well. Le trait – le retrait, La brisure / la trace, Das Einmalige / l’unique are a crucial category that enlighten – even without completely explai- ning– the evocative, unfolding and fragmentary nature of drawing. The depic- ted lines and marks disturb any stable presence, they are brisure / traces that interrupt any consequentiality and collocate the gesture and the effect of dra- wing in the future, expositing it to a “navigation première et sans grâce” (derri- da). the incompleteness of drawing and the unfolding nature of its conceptual narrative release from any traditional mimetic and static representation of the real as well as from its concluded figuration. However, such openness neither guarantees ipso facto the evocative potentiality of signs nor opens up new tra-
zurück zum  Buch JRFM - Journal Religion Film Media, Band 03/02"
JRFM Journal Religion Film Media, Band 03/02