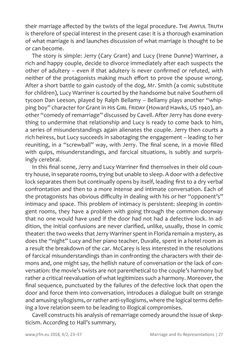 Marriage and Its Representations | 27www.jrfm.eu 2018, 4/2, 23–37 their marriage affected by the twists of the legal procedure. The Awful Truth is therefore of special interest in the present case: it is a thorough examination of what marriage is and launches discussion of what marriage is thought to be or can become. The story is simple: Jerry (Cary Grant) and Lucy (Irene Dunne) Warriner, a rich and happy couple, decide to divorce immediately after each suspects the other of adultery – even if that adultery is never confirmed or refuted, with neither of the protagonists making much effort to prove the spouse wrong. After a short battle to gain custody of the dog, Mr. Smith (a comic substitute for children), Lucy Warriner is courted by the handsome but naïve Southern oil tycoon Dan Leeson, played by Ralph Bellamy – Bellamy plays another “whip- ping boy” character for Grant in His Girl Friday (Howard Hawks, US 1940), an- other “comedy of remarriage” discussed by Cavell. After Jerry has done every- thing to undermine that relationship and Lucy is ready to come back to him, a series of misunderstandings again alienates the couple. Jerry then courts a rich heiress, but Lucy succeeds in sabotaging the engagement – leading to her reuniting, in a “screwball” way, with Jerry. The final scene, in a movie filled with quips, misunderstandings, and farcical situations, is subtly and surpris- ingly cerebral. In this final scene, Jerry and Lucy Warriner find themselves in their old coun- try house, in separate rooms, trying but unable to sleep. A door with a defective lock separates them but continually opens by itself, leading first to a dry verbal confrontation and then to a more intense and intimate conversation. Each of the protagonists has obvious difficulty in dealing with his or her “opponent’s” intimacy and space. This problem of intimacy is persistent: sleeping in contin- gent rooms, they have a problem with going through the common doorway that no one would have used if the door had not had a defective lock. In ad- dition, the initial confusions are never clarified, unlike, usually, those in comic theater: the two weeks that Jerry Warriner spent in Florida remain a mystery, as does the “night” Lucy and her piano teacher, Duvalle, spent in a hotel room as a result the breakdown of the car. McCarey is less interested in the resolutions of farcical misunderstandings than in confronting the characters with their de- mons and, one might say, the hellish nature of conversation or the lack of con- versation: the movie’s twists are not parenthetical to the couple’s harmony but rather a critical reevaluation of what legitimizes such a harmony. Moreover, the final sequence, punctuated by the failures of the defective lock that open the door and force them into conversation, introduces a dialogue built on strange and amusing syllogisms, or rather anti-syllogisms, where the logical terms defin- ing a love relation seem to be leading to illogical compromises. Cavell constructs his analysis of remarriage comedy around the issue of skep- ticism. According to Hall’s summary,
zurück zum  Buch JRFM - Journal Religion Film Media, Band 04/02"
JRFM Journal Religion Film Media, Band 04/02