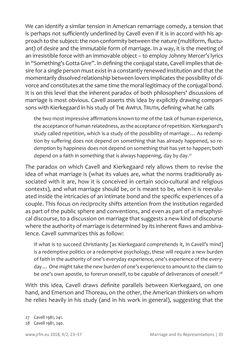 Marriage and Its Representations | 33www.jrfm.eu 2018, 4/2, 23–37 We can identify a similar tension in American remarriage comedy, a tension that is perhaps not sufficiently underlined by Cavell even if it is in accord with his ap- proach to the subject: the non-conformity between the nature (multiform, fluctu- ant) of desire and the immutable form of marriage. In a way, it is the meeting of an irresistible force with an immovable object – to employ Johnny Mercer’s lyrics in “Something’s Gotta Give”. In defining the conjugal state, Cavell implies that de- sire for a single person must exist in a constantly renewed institution and that the momentarily dissolved relationship between lovers implicates the possibility of di- vorce and constitutes at the same time the moral legitimacy of the conjugal bond. It is on this level that the inherent paradox of both philosophers’ discussions of marriage is most obvious. Cavell asserts this idea by explicitly drawing compari- sons with Kierkegaard in his study of The Awful Truth, defining what he calls the two most impressive affirmations known to me of the task of human experience, the acceptance of human relatedness, as the acceptance of repetition. Kierkegaard’s study called repetition, which is a study of the possibility of marriage … As redemp- tion by suffering does not depend on something that has already happened, so re- demption by happiness does not depend on something that has yet to happen; both depend on a faith in something that is always happening, day by day.27 The paradox on which Cavell and Kierkegaard rely allows them to revise the idea of what marriage is (what its values are, what the norms traditionally as- sociated with it are, how it is conceived in certain socio-cultural and religious contexts), and what marriage should be, or is meant to be, when it is reevalu- ated inside the intricacies of an intimate bond and the specific experiences of a couple. This focus on reciprocity shifts attention from the institution regarded as part of the public sphere and conventions, and even as part of a metaphysi- cal discourse, to a discussion on marriage that suggests a new kind of discourse where the authority of marriage is determined by its inherent flaws and ambiva- lence. Cavell summarizes this as follow: If what is to succeed Christianity [as Kierkegaard comprehends it, in Cavell’s mind] is a redemptive politics or a redemptive psychology, these will require a new burden of faith in the authority of one’s everyday experience, one’s experience of the every- day … One might take the new burden of one’s experience to amount to the claim to be one’s own apostle, to forerun oneself, to be capable of deliverances of oneself.28 With this idea, Cavell draws definite parallels between Kierkegaard, on one hand, and Emerson and Thoreau, on the other, the American thinkers on whom he relies heavily in his study (and in his work in general), suggesting that the 27 Cavell 1981, 241. 28 Cavell 1981, 240.
zurück zum  Buch JRFM - Journal Religion Film Media, Band 04/02"
JRFM Journal Religion Film Media, Band 04/02