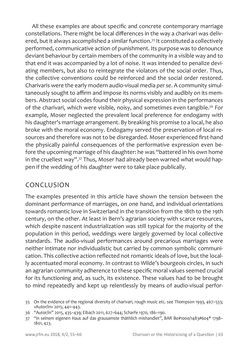 Charivari or the Historicising of a Question | 63www.jrfm.eu 2018, 4/2, 55–66 All these examples are about specific and concrete contemporary marriage constellations. There might be local differences in the way a charivari was deliv- ered, but it always accomplished a similar function.35 It constituted a collectively performed, communicative action of punishment. Its purpose was to denounce deviant behaviour by certain members of the community in a visible way and to that end it was accompanied by a lot of noise. It was intended to penalize devi- ating members, but also to reintegrate the violators of the social order. Thus, the collective conventions could be reinforced and the social order restored. Charivaris were the early modern audio-visual media per se. A community simul- taneously sought to affirm and impose its norms visibly and audibly on its mem- bers. Abstract social codes found their physical expression in the performances of the charivari, which were visible, noisy, and sometimes even tangible.36 For example, Moser neglected the prevalent local preference for endogamy with his daughter’s marriage arrangement. By breaking his promise to a local, he also broke with the moral economy. Endogamy served the preservation of local re- sources and therefore was not to be disregarded. Moser experienced first-hand the physically painful consequences of the performative expression even be- fore the upcoming marriage of his daughter: he was “battered in his own home in the cruellest way”.37 Thus, Moser had already been warned what would hap- pen if the wedding of his daughter were to take place publically. CONCLUSION The examples presented in this article have shown the tension between the dominant performance of marriages, on one hand, and individual orientations towards romantic love in Switzerland in the transition from the 18th to the 19th century, on the other. At least in Bern’s agrarian society with scarce resources, which despite nascent industrialization was still typical for the majority of the population in this period, weddings were largely governed by local collective standards. The audio-visual performances around precarious marriages were neither intimate nor individualistic but carried by common symbolic communi- cation. This collective action reflected not romantic ideals of love, but the local- ly accentuated moral economy. In contrast to Wilde’s bourgeois circles, in such an agrarian community adherence to these specific moral values seemed crucial for its functioning and, as such, its existence. These values had to be brought to mind repeatedly and kept up relentlessly by means of audio-visual perfor- 35 On the evidence of the regional diversity of charivari, rough music etc. see Thompson 1993, 467–533; «Autor/in» 2015, 441–443. 36 “Autor/in” 2015, 435–439; Eibach 2011, 627–644; Scharfe 1970, 186–190. 37 “in seinem eigenen Haus auf das grausamste thäthlich mishandlet”, BAR B0#1000/1483#604* 1798– 1801, 423.
zurück zum  Buch JRFM - Journal Religion Film Media, Band 04/02"
JRFM Journal Religion Film Media, Band 04/02