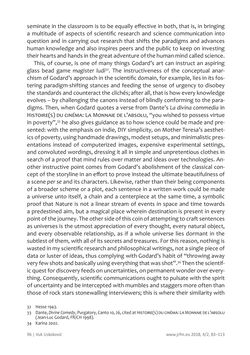 96 | Vuk Uskoković www.jrfm.eu 2018, 4/2, 83–113 seminate in the classroom is to be equally effective in both, that is, in bringing a multitude of aspects of scientific research and science communication into question and in carrying out research that shifts the paradigms and advances human knowledge and also inspires peers and the public to keep on investing their hearts and hands in the great adventure of the human mind called science. This, of course, is one of many things Godard’s art can instruct an aspiring glass bead game magister ludi32. The instructiveness of the conceptual anar- chism of Godard’s approach in the scientific domain, for example, lies in its fos- tering paradigm-shifting stances and feeding the sense of urgency to disobey the standards and counteract the clichés; after all, that is how every knowledge evolves – by challenging the canons instead of blindly conforming to the para- digms. Then, when Godard quotes a verse from Dante’s La divina commedia in Histoire(s) du cinéma: La Monnaie de l’absolu, “you wished to possess virtue in poverty”,33 he also gives guidance as to how science could be made and pre- sented: with the emphasis on indie, DIY simplicity, on Mother Teresa’s aesthet- ics of poverty, using handmade drawings, modest setups, and minimalistic pres- entations instead of computerized images, expensive experimental settings, and convoluted wordings, dressing it all in simple and unpretentious clothes in search of a proof that mind rules over matter and ideas over technologies. An- other instructive point comes from Godard’s abolishment of the classical con- cept of the storyline in an effort to prove instead the ultimate beautifulness of a scene per se and its characters. Likewise, rather than their being components of a broader scheme or a plot, each sentence in a written work could be made a universe unto itself, a chain and a centerpiece at the same time, a symbolic proof that Nature is not a linear stream of events in space and time towards a predestined aim, but a magical place wherein destination is present in every point of the journey. The other side of this coin of attempting to craft sentences as universes is the utmost appreciation of every thought, every natural object, and every observable relationship, as if a whole universe lies dormant in the subtlest of them, with all of its secrets and treasures. For this reason, nothing is wasted in my scientific research and philosophical writings, not a single piece of data or luster of ideas, thus complying with Godard’s habit of “throwing away very few shots and basically using everything that was shot”.34 Then the scientif- ic quest for discovery feeds on uncertainties, on permanent wonder over every- thing. Consequently, scientific communications ought to pulsate with the spirit of uncertainty and be intercepted with mumbles and staggers more often than those of rock stars stonewalling interviewers; this is where their similarity with 32 Hesse 1943. 33 Dante, Divine Comedy, Purgatory, Canto 10, 26, cited at Histoire(s) du cinéma: La Monnaie de l’absolu (Jean-Luc Godard, FR/CH 1998). 34 Karina 2002.
zurück zum  Buch JRFM - Journal Religion Film Media, Band 04/02"
JRFM Journal Religion Film Media, Band 04/02