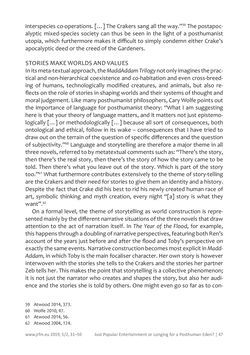 interspecies co-operations. […] The Crakers sang all the way.”59 The postapoc- alyptic mixed-species society can thus be seen in the light of a posthumanist utopia, which furthermore makes it difficult to simply condemn either Crake’s apocalyptic deed or the creed of the Gardeners. STORIES MAKE WORLDS AND VALUES In its meta-textual approach, the MaddAddam Trilogy not only imagines the prac- tical and non-hierarchical coexistence and co-habitation and even cross-breed- ing of humans, technologically modified creatures, and animals, but also re- flects on the role of stories in shaping worlds and their systems of thought and moral judgement. Like many posthumanist philosophers, Cary Wolfe points out the importance of language for posthumanist theory: “What I am suggesting here is that your theory of language matters, and it matters not just epistemo- logically […] or methodologically […] because all sort of consequences, both ontological and ethical, follow in its wake – consequences that I have tried to draw out on the terrain of the question of specific differences and the question of subjectivity.”60 Language and storytelling are therefore a major theme in all three novels, referred to by metatextual comments such as: “There’s the story, then there’s the real story, then there’s the story of how the story came to be told. Then there’s what you leave out of the story. Which is part of the story too.”61 What furthermore contributes extensively to the theme of story-telling are the Crakers and their need for stories to give them an identity and a history. Despite the fact that Crake did his best to rid his newly created human race of art, symbolic thinking and myth creation, every night “[a] story is what they want”.62 On a formal level, the theme of storytelling as world construction is repre- sented mainly by the different narrative situations of the three novels that draw attention to the act of narration itself. In The Year of the Flood, for example, this happens through a doubling of narrative perspectives, featuring both Ren’s account of the years just before and after the flood and Toby’s perspective on exactly the same events. Narrative construction becomes most explicit in Madd- Addam, in which Toby is the main focaliser character. Her own story is however interwoven with the stories she tells to the Crakers and the stories her partner Zeb tells her. This makes the point that storytelling is a collective phenomenon; it is not just the narrator who creates and shapes the story, but also her audi- ence and the stories she is told by others. One might even go so far as to con- 59 Atwood 2014, 373. 60 Wolfe 2010, 47. 61 Atwood 2014, 56. 62 Atwood 2004, 124. Just Popular Entertainment or Longing for a Posthuman Eden? | 47www.jrfm.eu 2019, 5/2, 31–50
zurück zum  Buch JRFM - Journal Religion Film Media, Band 05/02"
JRFM Journal Religion Film Media, Band 05/02