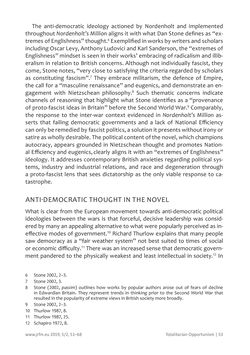 The anti-democratic ideology actioned by Nordenholt and implemented throughout Nordenholt’s Million aligns it with what Dan Stone defines as “ex- tremes of Englishness” thought.6 Exemplified in works by writers and scholars including Oscar Levy, Anthony Ludovici and Karl Sanderson, the “extremes of Englishness” mindset is seen in their works’ embracing of radicalism and illib- eralism in relation to British concerns. Although not individually fascist, they come, Stone notes, “very close to satisfying the criteria regarded by scholars as constituting fascism”.7 They embrace militarism, the defence of Empire, the call for a “masculine renaissance” and eugenics, and demonstrate an en- gagement with Nietzschean philosophy.8 Such thematic concerns indicate channels of reasoning that highlight what Stone identifies as a “provenance of proto-fascist ideas in Britain” before the Second World War.9 Comparably, the response to the inter-war context evidenced in Nordenholt’s Million as- serts that failing democratic governments and a lack of National Efficiency can only be remedied by fascist politics, a solution it presents without irony or satire as wholly desirable. The political content of the novel, which champions autocracy, appears grounded in Nietzschean thought and promotes Nation- al Efficiency and eugenics, clearly aligns it with an “extremes of Englishness” ideology. It addresses contemporary British anxieties regarding political sys- tems, industry and industrial relations, and race and degeneration through a proto-fascist lens that sees dictatorship as the only viable response to ca- tastrophe. ANTI-DEMOCRATIC THOUGHT IN THE NOVEL What is clear from the European movement towards anti-democratic political ideologies between the wars is that forceful, decisive leadership was consid- ered by many an appealing alternative to what were popularly perceived as in- effective modes of government.10 Richard Thurlow explains that many people saw democracy as a “fair weather system” not best suited to times of social or economic difficulty.11 There was an increased sense that democratic govern- ment pandered to the physically weakest and least intellectual in society.12 In 6 Stone 2002, 2–3. 7 Stone 2002, 3. 8 Stone (2002, passim) outlines how works by popular authors arose out of fears of decline in Edwardian Britain. They represent trends in thinking prior to the Second World War that resulted in the popularity of extreme views in British society more broadly. 9 Stone 2002, 2–3. 10 Thurlow 1987, 8. 11 Thurlow 1987, 25. 12 Schapiro 1972, 8. Totalitarian Opportunism | 53www.jrfm.eu 2019, 5/2, 51–68
zurück zum  Buch JRFM - Journal Religion Film Media, Band 05/02"
JRFM Journal Religion Film Media, Band 05/02