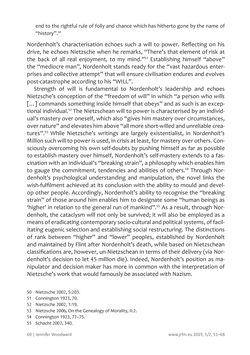 end to the rightful rule of folly and chance which has hitherto gone by the name of “history”.50 Nordenholt’s characterisation echoes such a will to power. Reflecting on his drive, he echoes Nietzsche when he remarks, “There’s that element of risk at the back of all real enjoyment, to my mind.”51 Establishing himself “above” the “mediocre man”, Nordenholt stands ready for the “vast hazardous enter- prises and collective attempt” that will ensure civilisation endures and evolves post-catastrophe according to his “WILL”. Strength of will is fundamental to Nordenholt’s leadership and echoes Nietzsche’s conception of the “freedom of will” in which “a person who wills […] commands something inside himself that obeys” and as such is an excep- tional individual.52 The Nietzschean will to power is characterised by an individ- ual’s mastery over oneself, which also “gives him mastery over circumstances, over nature” and elevates him above “all more short-willed and unreliable crea- tures”.53 While Nietzsche’s writings are largely existentialist, in Nordenholt’s Million such will to power is used, in crisis at least, for mastery over others. Con- sciously overcoming his own self-doubts by pushing himself as far as possible to establish mastery over himself, Nordenholt’s self-mastery extends to a fas- cination with an individual’s “breaking strain”, a philosophy which enables him to gauge the commitment, tendencies and abilities of others.54 Through Nor- denholt’s psychological understanding and manipulation, the novel links the wish-fulfilment achieved at its conclusion with the ability to mould and devel- op other people. Accordingly, Nordenholt’s ability to recognise the “breaking strain” of those around him enables him to designate some “human beings as ‘higher’ in relation to the general run of mankind”.55 As a result, through Nor- denholt, the cataclysm will not only be survived; it will also be employed as a means of eradicating contemporary socio-cultural and political systems, of facil- itating eugenic selection and establishing social restructuring. The distinctions of rank between “higher” and “lower” peoples, established by Nordenholt and maintained by Flint after Nordenholt’s death, while based on Nietzschean classifications are, however, un-Nietzschean in terms of their delivery (via Nor- denholt’s decision to let 45 million die). Indeed, Nordenholt’s position as ma- nipulator and decision maker has more in common with the interpretation of Nietzsche’s work that would famously be associated with Nazism. 50 Nietzsche 2002, 5:203. 51 Connington 1923, 70. 52 Nietzsche 2002, 1:19. 53 Nietzsche 2006, On the Genealogy of Morality, II:2. 54 Connington 1923, 72–75. 55 Schacht 2002, 340. 60 | Jennifer Woodward www.jrfm.eu 2019, 5/2, 51–68
zurück zum  Buch JRFM - Journal Religion Film Media, Band 05/02"
JRFM Journal Religion Film Media, Band 05/02