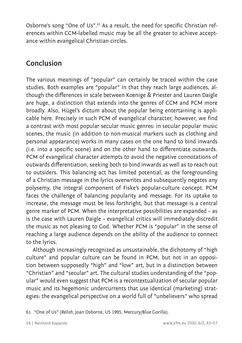 54 | Reinhard Kopanski www.jrfm.eu 2020, 6/2, 41–57 Osborne’s song “One of Us”.61 As a result, the need for specific Christian ref- erences within CCM-labelled music may be all the greater to achieve accept- ance within evangelical Christian circles. Conclusion The various meanings of “popular” can certainly be traced within the case studies. Both examples are “popular” in that they reach large audiences, al- though the differences in scale between Koenige & Priester and Lauren Daigle are huge, a distinction that extends into the genres of CCM and PCM more broadly. Also, Hügel’s dictum about the popular being entertaining is appli- cable here. Precisely in such PCM of evangelical character, however, we find a contrast with most popular secular music genres: in secular popular music scenes, the music (in addition to non-musical markers such as clothing and personal appearance) works in many cases on the one hand to bind inwards (i.e. into a specific scene) and on the other hand to differentiate outwards. PCM of evangelical character attempts to avoid the negative connotations of outwards differentiation, seeking both to bind inwards as well as to reach out to outsiders. This balancing act has limited potential, as the foregrounding of a Christian message in the lyrics overwrites and subsequently negates any polysemy, the integral component of Fiske’s popular-culture concept. PCM faces the challenge of balancing popularity and message. For its uptake to increase, the message must be less forthright, but that message is a central genre marker of PCM. When the interpretative possibilities are expanded – as is the case with Lauren Daigle – evangelical critics will immediately discredit the music as not pleasing to God. Whether PCM is “popular” in the sense of reaching a large audience depends on the ability of the audience to connect to the lyrics. Although increasingly recognized as unsustainable, the dichotomy of “high culture” and popular culture can be found in PCM, but not in an opposi- tion between supposedly “high” and “low” art, but in a distinction between “Christian” and “secular” art. The cultural studies understanding of the “pop- ular” would even suggest that PCM is a recontextualization of secular popular music and its hegemonic undercurrents that use identical (marketing) strat- egies: the evangelical perspective on a world full of “unbelievers” who spread 61 “One of Us” (Relish, Joan Osborne, US 1995, Mercury/Blue Gorilla).
zurück zum  Buch JRFM - Journal Religion Film Media, Band 06/02"
JRFM Journal Religion Film Media, Band 06/02