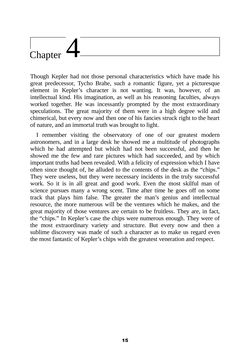 4Chapter Though Kepler had not those personal characteristics which have made his great predecessor, Tycho Brahe, such a romantic figure, yet a picturesque element in Kepler’s character is not wanting. It was, however, of an intellectual kind. His imagination, as well as his reasoning faculties, always worked together. He was incessantly prompted by the most extraordinary speculations. The great majority of them were in a high degree wild and chimerical, but every now and then one of his fancies struck right to the heart of nature, and an immortal truth was brought to light. I remember visiting the observatory of one of our greatest modern astronomers, and in a large desk he showed me a multitude of photographs which he had attempted but which had not been successful, and then he showed me the few and rare pictures which had succeeded, and by which important truths had been revealed. With a felicity of expression which I have often since thought of, he alluded to the contents of the desk as the “chips.” They were useless, but they were necessary incidents in the truly successful work. So it is in all great and good work. Even the most skilful man of science pursues many a wrong scent. Time after time he goes off on some track that plays him false. The greater the man’s genius and intellectual resource, the more numerous will be the ventures which he makes, and the great majority of those ventures are certain to be fruitless. They are, in fact, the “chips.” In Kepler’s case the chips were numerous enough. They were of the most extraordinary variety and structure. But every now and then a sublime discovery was made of such a character as to make us regard even the most fantastic of Kepler’s chips with the greatest veneration and respect. 15
zurück zum  Buch Great Astronoms - Johannes Kepler"
Great Astronoms Johannes Kepler