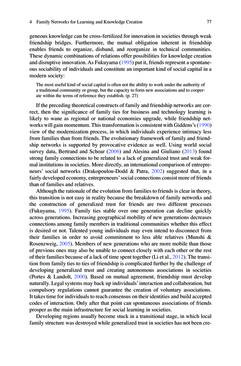 77 geneous knowledge can be cross-fertilized for innovation in societies through weak friendship bridges. Furthermore, the mutual obligation inherent in friendship enables friends to organize, disband, and reorganize in technical communities. These dynamic combinations of relations offer possibilities for knowledge creation and disruptive innovation. As Fukuyama (1995) put it, friends represent a spontane- ous sociability of individuals and constitute an important kind of social capital in a modern society: The most useful kind of social capital is often not the ability to work under the authority of a traditional community or group, but the capacity to form new associations and to cooper- ate within the terms of reference they establish. (p. 27) If the preceding theoretical constructs of family and friendship networks are cor- rect, then the significance of family ties for business and technology learning is likely to wane as regional or national economies upgrade, while friendship net- works will gain momentum. This transformation is consistent with Giddens’s (1990) view of the modernization process, in which individuals experience intimacy less from families than from friends. The evolutionary framework of family and friend- ship networks is supported by provocative evidence as well. Using world social survey data, Bertrand and Schoar (2006) and Alesina and Giuliano (2013) found strong family connections to be related to a lack of generalized trust and weak for- mal institutions in societies. More directly, an international comparison of entrepre- neurs’ social networks (Drakopoulou-Dodd & Patra, 2002) suggested that, in a fairly developed economy, entrepreneurs’ social connections consist more of friends than of families and relatives. Although the rationale of the evolution from families to friends is clear in theory, this transition is not easy in reality because the breakdown of family networks and the construction of generalized trust for friends are two different processes (Fukuyama, 1995). Family ties stable over one generation can decline quickly across generations. Increasing geographical mobility of new generations decreases connections among family members in traditional communities whether this effect is desired or not. Talented young individuals may even intend to disconnect from their families in order to avoid commitment to less able relatives (Munshi & Rosenzweig, 2005). Members of new generations who are more mobile than those of previous ones may also be unable to connect closely with each other or the rest of their families because of a lack of time spent together (Li et al., 2012). The transi- tion from family ties to ties of friendship is complicated further by the challenge of developing generalized trust and creating autonomous associations in societies (Portes & Landolt, 2000). Based on mutual agreement, friendship must develop naturally. Legal systems may back up individuals’ interaction and collaboration, but compulsory regulations cannot guarantee the creation of voluntary associations. It takes time for individuals to reach consensus on their identities and build accepted codes of interaction. Only after that point can spontaneous associations of friends prosper as the main infrastructure for social learning in societies. Developing regions usually become stuck in a transitional stage, in which local family structure was destroyed while generalized trust in societies has not been cre- 4 Family Networks for Learning and Knowledge Creation
zurück zum  Buch Knowledge and Networks"
Knowledge and Networks