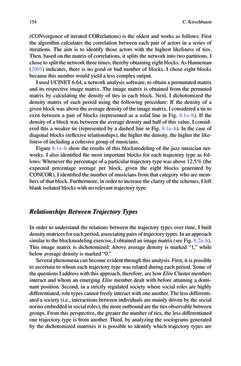 154 (CONvergence of iterated CORrelations) is the oldest and works as follows: First the algorithm calculates the correlation between each pair of actors in a series of iterations. The aim is to identify those actors with the highest likeliness of ties. Then, based on the matrix of correlations, it splits the network into two partitions. I chose to split the network three times, thereby obtaining eight blocks. As Hanneman (2001) indicates, there is no good or bad number of blocks. I chose eight blocks because this number would yield a less complex output. I used UCINET 6.64, a network analysis software, to obtain a permutated matrix and its respective image matrix. The image matrix is obtained from the permuted matrix by calculating the density of ties in each block. Next, I dichotomized the density matrix of each period using the following procedure: If the density of a given block was above the average density of the image matrix, I considered a tie to exist between a pair of blocks (represented as a solid line in Fig. 8.1a–h). If the density of a block was between the average density and half of this value, I consid- ered this a weaker tie (represented by a dashed line in Fig. 8.1a–h). In the case of diagonal blocks (reflexive relationships), the higher the density, the higher the like- liness of including a cohesive group of musicians. Figure 8.1a–h show the results of this blockmodeling of the jazz musician net- works. I also identified the most important blocks for each trajectory type as fol- lows: Whenever the percentage of a particular trajectory type was above 12.5 % (the expected percentage average per block, given the eight blocks generated by CONCOR), I identified the number of musicians from that category who are mem- bers of that block. Furthermore, in order to increase the clarity of the schemes, I left blank isolated blocks with no relevant trajectory type. Relationships Between Trajectory Types In order to understand the relations between the trajectory types over time, I built density matrices for each period, associating pairs of trajectory types. In an approach similar to the blockmodeling exercise, I obtained an image matrix (see Fig. 8.2a–h). This image matrix is dichotomized: Above average density is marked “1,” while below average density is marked “0.” Several phenomena can become evident through this analysis. First, it is possible to ascertain to whom each trajectory type was related during each period. Some of the questions I address with this approach, therefore, are how Elite Cluster members interact and whom an emerging Elite member dealt with before attaining a domi- nant position. Second, in a strictly regulated society where social roles are highly differentiated, role types cannot freely interact with one another. The less differenti- ated a society (i.e., interactions between individuals are mainly driven by the social norms embedded in social roles), the more outbound are the ties observable between groups. From this perspective, the greater the number of ties, the less differentiated one trajectory type is from another. Third, by analyzing the sociograms generated by the dichotomized matrixes it is possible to identify which trajectory types are C. Kirschbaum
zurück zum  Buch Knowledge and Networks"
Knowledge and Networks