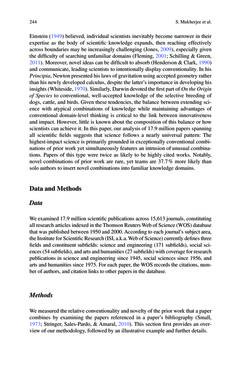 244 Einstein (1949) believed, individual scientists inevitably become narrower in their expertise as the body of scientific knowledge expands, then reaching effectively across boundaries may be increasingly challenging (Jones, 2009), especially given the difficulty of searching unfamiliar domains (Fleming, 2001; Schilling & Green, 2011). Moreover, novel ideas can be difficult to absorb (Henderson & Clark, 1990) and communicate, leading scientists to intentionally display conventionality. In his Principia, Newton presented his laws of gravitation using accepted geometry rather than his newly developed calculus, despite the latter’s importance in developing his insights (Whiteside, 1970). Similarly, Darwin devoted the first part of On the Origin of Species to conventional, well-accepted knowledge of the selective breeding of dogs, cattle, and birds. Given these tendencies, the balance between extending sci- ence with atypical combinations of knowledge while maintaining advantages of conventional domain-level thinking is critical to the link between innovativeness and impact. However, little is known about the composition of this balance or how scientists can achieve it. In this paper, our analysis of 17.9 million papers spanning all scientific fields suggests that science follows a nearly universal pattern: The highest- impact science is primarily grounded in exceptionally conventional combi- nations of prior work yet simultaneously features an intrusion of unusual combina- tions. Papers of this type were twice as likely to be highly cited works. Notably, novel combinations of prior work are rare, yet teams are 37.7 % more likely than solo authors to insert novel combinations into familiar knowledge domains. Data and Methods Data We examined 17.9 million scientific publications across 15,613 journals, constituting all research articles indexed in the Thomson Reuters Web of Science (WOS) database that was published between 1950 and 2000. According to each journal’s subject area, the Institute for Scientific Research (ISI, a.k.a. Web of Science) currently defines three fields and constituent subfields: science and engineering (171 subfields), social sci- ences (54 subfields), and arts and humanities (27 subfields) with coverage for research publications in science and engineering since 1945, social sciences since 1956, and arts and humanities since 1975. For each paper, the WOS records the citations, num- ber of authors, and citation links to other papers in the database. Methods We measured the relative conventionality and novelty of the prior work that a paper combines by examining the papers referenced in a paper’s bibliography (Small, 1973; Stringer, Sales-Pardo, & Amaral, 2010). This section first provides an over- view of our methodology, followed by an illustrative example and further details. S. Mukherjee et al.
zurück zum  Buch Knowledge and Networks"
Knowledge and Networks