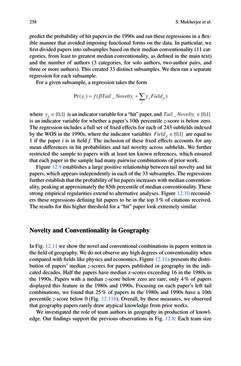 258 predict the probability of hit papers in the 1990s and ran these regressions in a flex- ible manner that avoided imposing functional forms on the data. In particular, we first divided papers into subsamples based on their median conventionality (11 cat- egories, from least to greatest median conventionality, as defined in the main text) and the number of authors (3 categories, for solo authors, two-author pairs, and three or more authors). This created 33 distinct subsamples. We then ran a separate regression for each subsample. For a given subsample, a regression takes the form Pr( ) ( _ )y f Tail Novelty Fieldi i f f fi= +∑β γ where yij∈{ }01, is an indicator variable for a “hit” paper, and Tail Noveltyi_ { }∈ 01, is an indicator variable for whether a paper’s 10th percentile z-score is below zero. The regression includes a full set of fixed effects for each of 243 subfields indexed by the WOS in the 1990s, where the indicator variables Fieldfi∈{ }01, are equal to 1 if the paper i is in field f. The inclusion of these fixed effects accounts for any mean differences in hit probabilities and tail novelty across subfields. We further restricted the sample to papers with at least ten known references, which ensured that each paper in the sample had many pairwise combinations of prior work. Figure 12.9 establishes a large positive relationship between tail novelty and hit papers, which appears independently in each of the 33 subsamples. The regressions further establish that the probability of hit papers increases with median convention- ality, peaking at approximately the 85th percentile of median conventionality. These strong empirical regularities extend to alternative analyses. Figure 12.10 reconsid- ers these regressions defining hit papers to be in the top 1 % of citations received. The results for this higher threshold for a “hit” paper look extremely similar. Novelty and Conventionality in Geography In Fig. 12.11 we show the novel and conventional combinations in papers written in the field of geography. We do not observe any high degrees of conventionality when compared with fields like physics and economics. Figure 12.11a presents the distri- bution of papers’ median z-scores for papers published in geography in the indi- cated decades. Half the papers have median z-scores exceeding 16 in the 1980s in the 1990s. Papers with a median z-score below zero are rare; only 4 % of papers displayed this feature in the 1980s and 1990s. Focusing on each paper’s left tail combinations, we found that 25 % of papers in the 1980s and 1990s have a 10th percentile z-score below 0 (Fig. 12.11b). Overall, by these measures, we observed that geography papers rarely draw atypical knowledge from prior works. We investigated the role of team authors in geography in production of knowl- edge. Our findings support the previous observations in Fig. 12.8: Each team size S. Mukherjee et al.
zurück zum  Buch Knowledge and Networks"
Knowledge and Networks