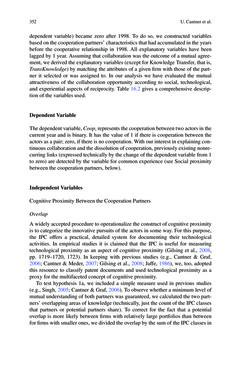 352 dependent variable) became zero after 1998. To do so, we constructed variables based on the cooperation partners’ characteristics that had accumulated in the years before the cooperative relationship in 1998. All explanatory variables have been lagged by 1 year. Assuming that collaboration was the outcome of a mutual agree- ment, we derived the explanatory variables (except for Knowledge Transfer, that is, TransKnowledge) by matching the attributes of a given firm with those of the part- ner it selected or was assigned to. In our analysis we have evaluated the mutual attractiveness of the collaboration opportunity according to social, technological, and experiential aspects of reciprocity. Table 16.2 gives a comprehensive descrip- tion of the variables used. Dependent Variable The dependent variable, Coop, represents the cooperation between two actors in the current year and is binary. It has the value of 1 if there is cooperation between the actors as a pair; zero, if there is no cooperation. With our interest in explaining con- tinuous collaboration and the dissolution of cooperation, previously existing nonre- curring links (expressed technically by the change of the dependent variable from 1 to zero) are detected by the variable for common experience (see Social proximity between the cooperation partners, below). Independent Variables Cognitive Proximity Between the Cooperation Partners Overlap A widely accepted procedure to operationalize the construct of cognitive proximity is to categorize the innovative pursuits of the actors in some way. For this purpose, the IPC offers a practical, detailed system for documenting their technological activities. In empirical studies it is claimed that the IPC is useful for measuring technological proximity as an aspect of cognitive proximity (Gilsing et al., 2008, pp. 1719–1720, 1723). In keeping with previous studies (e.g., Cantner & Graf, 2006; Cantner & Meder, 2007; Gilsing et al., 2008; Jaffe, 1986), we, too, adopted this resource to classify patent documents and used technological proximity as a proxy for the multifaceted concept of cognitive proximity. To test hypothesis 1a, we included a simple measure used in previous studies (e.g., Singh, 2005; Cantner & Graf, 2006). To observe whether a minimum level of mutual understanding of both partners was guaranteed, we calculated the two part- ners’ overlapping areas of knowledge (technically, just the count of the IPC classes that partners or potential partners share). To correct for the fact that a potential overlap is more likely between firms with relatively large portfolios than between for firms with smaller ones, we divided the overlap by the sum of the IPC classes in U. Cantner et al.
zurück zum  Buch Knowledge and Networks"
Knowledge and Networks