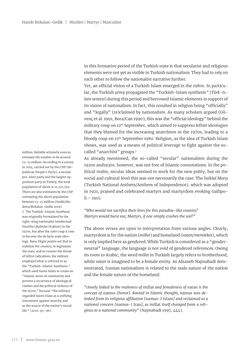 119 | www.limina-graz.eu hande Birkalan-Gedik | muslim | martyr | masculine in this formative period of the Turkish state is that secularist and religious elements were not yet as visible in Turkish nationalism. They had to rely on each other to follow the nationalist narrative further. Yet, an official vision of a Turkish Islam emerged in the 1980s. In particu- lar, the Turkish army propagated the “Turkish-Islam synthesis” (Türk-Is- lam sentezi) during this period and borrowed Islamic elements in support of its vision of nationalism. In fact, this resulted in religion being “officially” and “legally” (re)claimed by nationalists. As many scholars argued (Gü- venç et al. 1991, Bora/Can 1990), this was the “official ideology” behind the military coup on 12th September, which aimed to suppress leftist ideologies that they blamed for the increasing anarchism in the 1970s, leading to a bloody coup on 12th September 1980. Religion, as the idea of Turkish Islam shows, was used as a means of political leverage to fight against the so- called “anarchist” groups.7 As already mentioned, the so-called “secular” nationalism during the 1920s and1930s, however, was not free of Islamic connotations. In the po- litical realm, secular ideas seemed to work for the new polity, but on the social and cultural level this was not necessarily the case. The İstiklal Marşı (Turkish National Anthem/Anthem of Independence), which was adopted in 1921, praised and celebrated martyrs and martyrdom evoking Gallipo- li  –  1915: “Who would not sacrifice their lives for this paradise-like country? Martyrs would burst out, Martyrs, if one simply crushes the soil!” The above verses are open to interpretation from various angles. Clearly, martyrdom is for the nation (millet) and homeland (vatan/memleket), which is only implied here as gendered. While Turkish is considered as a “gender- neutral” language, the language is not void of gendered references. Owing its roots to Arabic, the word millet in Turkish largely refers to brotherhood, while vatan is imagined to be a female entity. As Afsaneh Najmabadi dem- onstrated, Iranian nationalism is related to the male nature of the nation and the female nature of the homeland: “closely linked to the maleness of millat and femaleness of vatan is the concept of namus [honor]. Rooted in Islamic thought, namus was de- linked from its religious affiliation [namus-I Islam] and reclaimed as a national concern [namus-i Iran], as millat itself changed from a reli- gious to a national community” (Najmabadi 1997, 444). million. Reliable scholarly sources estimate the number to be around 12–13 million. According to a survey in 2014, carried out by the CHP (Re- publican People’s Party), a secular pro-Alevi party and the largest op- position party in Turkey, the total population of Alevis is 12,521,792. There are also estimates by the CHP estimating the Alevis population between 13–15 million (Gedik/Ma- deira/Birkalan-Gedik 2019). 7 The Turkish-Islamic Synthesis was originally formulated by the right-wing nationalist Intellectual Hearths (Aydınlar Ocakları) in the 1970s, but after the 1980 coup it rose to become the de facto state ideo- logy. Banu Eligür points out that to stabilize the country, to legitimize the state, and to counter the threat of leftist radicalism, the military employed what is referred to as the “Turkish-Islamic Synthesis,” which used Sunni Islam to create an “Islamic sense of community and prevent a recurrence of ideological clashes and the political violence of the 1970s,” because “the military regarded Sunni Islam as a unifying instrument against anarchy and as the source of the nation’s moral life.“ (2010, 95–96).
zurück zum  Buch Limina - Grazer theologische Perspektiven, Band 2:1"
Limina Grazer theologische Perspektiven, Band 2:1