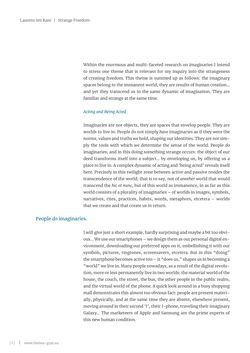 141 | www.limina-graz.eu Laurens ten Kate | Strange Freedom Within the enormous and multi-faceted research on imaginaries I intend to stress one theme that is relevant for my inquiry into the strangeness of creating freedom. This theme is summed up as follows: the imaginary spaces belong to the immanent world, they are results of human creation… and yet they transcend us in the same dynamic of imagination. They are familiar and strange at the same time. Acting and Being Acted Imaginaries are not objects, they are spaces that envelop people. They are worlds to live in. People do not simply have imaginaries as if they were the norms, values and truths we hold, shaping our identities. They are not sim- ply the tools with which we determine the sense of the world. People do imaginaries, and in this doing something strange occurs: the object of our deed transforms itself into a subject… by enveloping us, by offering us a place to live in. A complex dynamic of acting and ‘being acted’ reveals itself here. Precisely in this twilight zone between active and passive resides the transcendence of the world; that is to say, not of another world that would transcend the hic et nunc, but of this world as immanence, in as far as this world consists of a plurality of imaginaries – of worlds in images, symbols, narratives, rites, practices, habits, words, metaphors, etcetera – worlds that we create and that create us in return. I will give just a short example, hardly surprising and maybe a bit too obvi- ous… We use our smartphones – we design them as our personal digital en- vironment, downloading our preferred apps on it, embellishing it with our symbols, pictures, ringtones, screensavers, etcetera. But in this “doing” the smartphone becomes active too – it “does us,” shapes us in becoming a “world” we live in. Many people nowadays, as a result of the digital revolu- tion, more or less permanently live in two worlds: the material world of the house, the couch, the street, the bus, the other people in the public realm, and the virtual world of the phone. A quick look around in a busy shopping mall demonstrates this almost too obvious fact: people are present materi- ally, physically, and at the same time they are absent, elsewhere present, moving around in their second ‘I’, their I-phone, traveling their imaginary Galaxy… The marketeers of Apple and Samsung are the prime experts of this new human condition. People do imaginaries.
zurück zum  Buch Limina - Grazer theologische Perspektiven, Band 2:2"
Limina Grazer theologische Perspektiven, Band 2:2