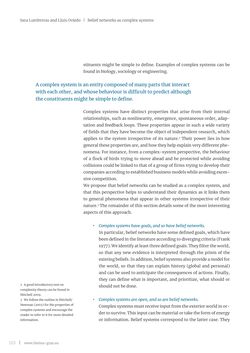 103 | www.limina-graz.eu Sara Lumbreras and Lluis Oviedo | Belief networks as complex systems stituents might be simple to define. Examples of complex systems can be found in biology, sociology or engineering. Complex systems have distinct properties that arise from their internal relationships, such as nonlinearity, emergence, spontaneous order, adap- tation and feedback loops. These properties appear in such a wide variety of fields that they have become the object of independent research, which applies to the system irrespective of its nature.2 Their power lies in how general these properties are, and how they help explain very different phe- nomena. For instance, from a complex-system perspective, the behaviour of a flock of birds trying to move ahead and be protected while avoiding collisions could be linked to that of a group of firms trying to develop their companies according to established business models while avoiding exces- sive competition. We propose that belief networks can be studied as a complex system, and that this perspective helps to understand their dynamics as it links them to general phenomena that appear in other systems irrespective of their nature.3 The remainder of this section details some of the most interesting aspects of this approach. ̟ Complex systems have goals, and so have belief networks. In particular, belief networks have some defined goals, which have been defined in the literature according to diverging criteria (Frank 1977). We identify at least three defined goals. They filter the world, so that any new evidence is interpreted through the prism of the existing beliefs. In addition, belief systems also provide a model for the world, so that they can explain history (global and personal) and can be used to anticipate the consequences of actions. Finally, they can define what is important, and prioritize, what should or should not be done. ̟ Complex systems are open, and so are belief networks. Complex systems must receive input from the exterior world in or- der to survive. This input can be material or take the form of energy or information. Belief systems correspond to the latter case. They A complex system is an entity composed of many parts that interact with each other, and whose behaviour is difficult to predict although the constituents might be simple to define. 2 A good introductory text on complexity theory can be found in Mitchell 2009. 3 We follow the outline in Mitchell/ Newman (2002) for the properties of complex systems and encourage the reader to refer to it for more detailed information.
zurück zum  Buch Limina - Grazer theologische Perspektiven, Band 3:2"
Limina Grazer theologische Perspektiven, Band 3:2