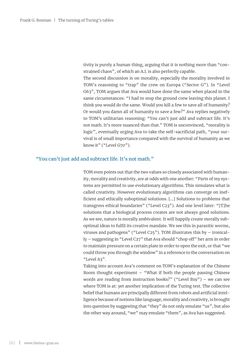 161 | www.limina-graz.eu Frank G. Bosman | The turning of Turing’s tables tivity is purely a human thing, arguing that it is nothing more than “con- strained chaos”, of which an A.I. is also perfectly capable. The second discussion is on morality, especially the morality involved in TOM’s reasoning to “trap” the crew on Europa (“Sector G”). In “Level G63”, TOM argues that Ava would have done the same when placed in the same circumstances: “I had to stop the ground crew leaving this planet. I think you would do the same. Would you kill a few to save all of humanity? Or would you damn all of humanity to save a few?” Ava replies negatively to TOM’s utilitarian reasoning: “You can’t just add and subtract life. It’s not math. It’s more nuanced than that.” TOM is unconvinced, “morality is logic”, eventually urging Ava to take the self-sacrificial path, “your sur- vival is of small importance compared with the survival of humanity as we know it” (“Level G70”). TOM even points out that the two values so closely associated with human- ity, morality and creativity, are at odds with one another: “Parts of my sys- tems are permitted to use evolutionary algorithms. This simulates what is called creativity. However evolutionary algorithms can converge on inef- ficient and ethically suboptimal solutions. […] Solutions to problems that transgress ethical boundaries” (“Level C23”). And one level later: “[T]he solutions that a biological process creates are not always good solutions. As we see, nature is morally ambivalent. It will happily create morally sub- optimal ideas to fulfil its creative mandate. We see this in parasitic worms, viruses and pathogens” (“Level C25”). TOM illustrates this by – ironical- ly – suggesting in “Level C27” that Ava should “chop off” her arm in order to maintain pressure on a certain plate in order to open the exit, or that “we could throw you through the window” in a reference to the conversation on “Level A3”. Taking into account Ava’s comment on TOM’s explanation of the Chinese Room thought experiment – “What if both the people passing Chinese words are reading from instruction books?” (“Level B19”) – we can see where TOM is at: yet another implication of the Turing test. The collective belief that humans are principally different from robots and artificial intel- ligence because of notions like language, morality and creativity, is brought into question by suggesting that “they” do not only emulate “us”, but also the other way around, “we” may emulate “them”, as Ava has suggested. “You can’t just add and subtract life. It’s not math.”
zurück zum  Buch Limina - Grazer theologische Perspektiven, Band 3:2"
Limina Grazer theologische Perspektiven, Band 3:2