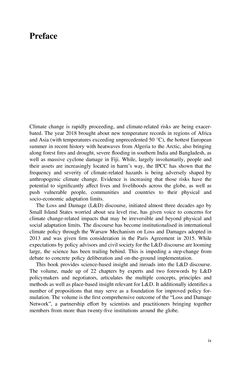 Preface Climate change is rapidly proceeding, and climate-related risks are being exacer- bated. The year 2018 brought about new temperature records in regions of Africa andAsia (with temperatures exceedingunprecedented50 °C), thehottestEuropean summer in recent historywith heatwaves fromAlgeria to theArctic, also bringing along forestﬁres anddrought, severeflooding in southern India andBangladesh, as well as massive cyclone damage in Fiji. While, largely involuntarily, people and their assets are increasingly located in harm’s way, the IPCC has shown that the frequency and severity of climate-related hazards is being adversely shaped by anthropogenic climate change. Evidence is increasing that those risks have the potential to signiﬁcantly affect lives and livelihoods across the globe, as well as push vulnerable people, communities and countries to their physical and socio-economic adaptation limits. The Loss andDamage (L&D) discourse, initiated almost three decades ago by Small Island States worried about sea level rise, has given voice to concerns for climate change-related impacts that may be irreversible and beyond physical and social adaptation limits. Thediscourse has become institutionalised in international climate policy through theWarsawMechanism on Loss andDamages adopted in 2013 and was given ﬁrm consideration in the Paris Agreement in 2015. While expectationsbypolicyadvisorsandcivil society for theL&Ddiscourseare looming large, the science has been trailing behind. This is impeding a step-change from debate to concrete policy deliberation and on-the-ground implementation. This book provides science-based insight and inroads into the L&D discourse. The volume, made up of 22 chapters by experts and two forewords by L&D policymakers and negotiators, articulates the multiple concepts, principles and methodsaswell asplace-based insight relevant forL&D. It additionally identiﬁes a number of propositions that may serve as a foundation for improved policy for- mulation.Thevolume is theﬁrst comprehensiveoutcomeof the“LossandDamage Network”, a partnership effort by scientists and practitioners bringing together members frommore than twenty-ﬁve institutions around the globe. ix
zurück zum  Buch Loss and Damage from Climate Change - Concepts, Methods and Policy Options"
Loss and Damage from Climate Change Concepts, Methods and Policy Options