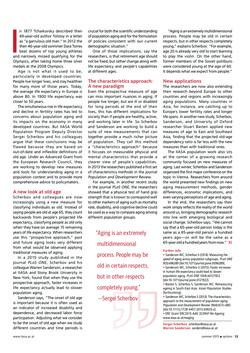 13summer 2015 + optionswww.iiasa.ac.at I n 1877 Tchaikovsky described then 49-year-old author Tolstoy in a letter as “a garrulous old man.” In 2012 the then 46-year-old swimmer Dara Torres beat dozens of top young athletes and narrowly missed qualifying for the Olympics, after taking home three silver medals at the 2008 Olympics. Age is not what it used to be, particularly in developed countries. People live longer lives, and stay healthier for many more of those years. Today, the average life expectancy in Europe is above  80. In  1900 life expectancy was closer to 50 years. The simultaneous rise in life expectancy and decline in fertility rates has led to concerns about population aging and its impacts on the economy in many developed countries. But IIASA World Population Program Deputy Director Sergei Scherbov and his colleagues argue that these conclusions may be flawed because they are based on out-of-date and inflexible definitions of old age. Under an Advanced Grant from the European Research Council, they are working to develop new measures and tools for understanding aging in a population context and to provide more comprehensive advice to policymakers. A new look at old age Scherbov and colleagues are now increasingly using a new measure for classifying individuals as old. Instead of saying people are old at age 65, they count backwards from people’s projected life expectancy, classifying people as old only when they have on average 15 remaining years of life expectancy. When researchers use this “prospective approach,” past and future aging looks very different from what would be observed applying traditional measures of aging. In a 2015 study published in the journal PLoS ONE, Scherbov and his colleague Warren Sanderson, a researcher at IIASA and Stony Brook University in New York, found that when they use the prospective approach, faster increases in life expectancy actually lead to slower population aging. Sanderson says, “The onset of old age is important because it is often used as an indicator of increased disability and dependence, and decreased labor force participation. Adjusting what we consider to be the onset of old age when we study different countries and time periods is crucial for both the scientific understanding of population aging and for the formulation of policies consistent with our current demographic situation.” One of those implications, say the researchers, is that retirement age should not be fixed, but rather change along with life expectancy and people’s capabilities at different ages. The characteristics approach: A new paradigm Even the prospective measure of age can miss important nuances in aging. If people live longer, but are ill or disabled for long periods at the end of their lives, this has different implications for society than if people are healthy, active, and working later in life. So Scherbov and Sanderson are working to build a suite of new measurements that can together provide a much richer picture of population. They call this method a “characteristics approach” because it focuses on measurable physical and mental characteristics that provide a clearer view of people’s capabilities. In  2013 the researchers published a first set of characteristics methods in the journal Population and Development Review. For example, in another recent study in the journal PLoS ONE, the researchers showed that a physical test of hand grip strength that is known to correspond well to other markers of aging such as mortality rate, disability, and cognitive decline could be used as a way to compare aging among different population groups. “Aging is an extremely multidimensional process. People may be old in certain respects, but in other respects completely young,” explains Scherbov. “For example, age 20 is already very old to start learning to play the violin. On the other hand, former members of the Soviet politburo were considered young at the age of 60. It depends what we expect from people.” New applications The researchers are now also extending their research beyond Europe to other countries and regions with increasingly aging populations. Many countries in Asia, for instance, are catching up to Europe’s lower fertility rates and longer life spans. In another new study, Scherbov, Sanderson, and University of Oxford researcher Stuart Basten applied new measures of age to East and Southeast Asia, finding that the projected old-age dependency ratio is far less with the new measures than with traditional ones. The IIASA population work also sits at the center of a growing research community focused on new measures of aging. Last winter, Scherbov and Sanderson organized the first major conference on the topic in Vienna. Researchers from around the world presented new findings on new aging measurement methods, gender differences, economic implications, and even varying perceptions of age and aging. In the end, the researchers say their work simply reflects the reality of the world around us, bringing demographic research into line with emerging biological and social change. Scherbov says, “We cannot say that a 65-year-old person today is the same as a 65-year-old person a hundred years ago—or will be the same as a 65-year-old a hundred years from now.” KL Further info § Sanderson WC, Scherbov S (2014). Measuring the speed of aging across population subgroups. PLoS ONE 9(5):e96289 [doi:10.1371/journal.pone.0096289]. § Sanderson WC, Scherbov S (2015). Faster increases in human life expectancy could lead to slower population aging. PLoS ONE 10(4):e0121922 [doi:10.1371/journal.pone.0121922]. § Basten S, Scherbov S, Sanderson WC. Remeasuring ageing in South-East Asia. Asian Population Studies (forthcoming). § Sanderson WC, Scherbov S (2013). The characteristics approach to the measurement of population aging. Population and Development Review 39(4):673–685 [doi:10.1111/j.1728-4457.2013.00633.x]. § ERC Grant ERC2013-AdG 323947-Re-Ageing: www.iiasa.ac.at/reaging Sergei Scherbov scherbov@iiasa.ac.at Warren Sanderson sanders@iiasa.ac.at “Aging is an extremely multidimensional process. People may be old in certain respects, but in other respects completely  young.” —Sergei Scherbov
zurück zum  Buch options, Band summer 2015"
options Band summer 2015