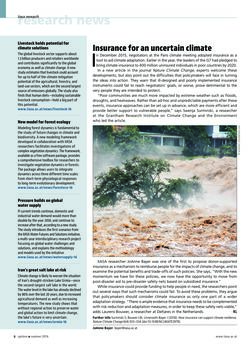 research news 6 options + summer 2016 www.iiasa.ac.at iiasa research Insurance for an uncertain climate In December 2015, negotiators at the Paris climate meeting adopted insurance as a tool to aid climate adaptation. Earlier in the year, the leaders of the G7 had pledged to bring climate insurance to 400 million uninsured individuals in poor countries by 2020. In a new article in the journal Nature Climate Change, experts welcome these developments, but also point out the difficulties that policymakers will face in turning the ideas into action. They warn that ill‑designed and poorly implemented insurance instruments could fail to reach negotiators’ goals, or worse, prove detrimental to the very people they are intended to protect. “Poor communities are much more impacted by extreme weather such as floods, droughts, and heatwaves. Rather than ad‑hoc and unpredictable payments after these events, insurance approaches can be set up in advance, which are more efficient and provide better support to vulnerable people,” says Swenja Surminski, a  researcher at the Grantham Research Institute on Climate Change and the Environment who led the article. IIASA researcher JoAnne Bayer was one of the first to propose donor‑supported insurance as a mechanism to reimburse people for the impacts of climate change, and to examine the potential benefits and trade‑offs of such policies. She says, “With  the  new momentum we have for these policies, we now have the opportunity to move from post‑disaster aid to pre‑disaster safety nets based on subsidized insurance.” While insurance could provide funding to help people in need, the researchers point out several ways that such mechanisms could fail. To avoid these problems, they  argue that policymakers should consider climate insurance as only one part of a wider adaptation strategy. “There is ample evidence that insurance needs to be complemented with risk reduction and adaptation measures, in order to keep these safety nets viable,” adds  Laurens  Bouwer, a researcher at Deltares in the Netherlands. KL Further info Surminski  S, Bouwer  LM, Linnerooth-Bayer  J (2016). How insurance can support climate resilience. Nature Climate Change 6(4):333–334 [doi:10.1038/NCLIMATE2979]. JoAnne Bayer bayer@iiasa.ac.at Livestock holds potential for climate solutions The global livestock sector supports about 1.3  billion producers and retailers worldwide and contributes significantly to the global economy as well as climate change. A new study estimates that livestock could account for up to half of the climate mitigation potential of the agricultural, forestry, and land‑use sectors, which are the second largest source of emissions globally. The study also finds that human diets—including sustainable livestock consumption—hold a big part of this potential. www.iiasa.ac.at/news/livestock-16 New model for forest ecology Modeling forest dynamics is fundamental to the study of future changes in climate and biodiversity. A new modeling framework developed in collaboration with IIASA researchers facilitates investigations of complex vegetation dynamics. The framework, available as a free software package, provides a comprehensive toolbox for researchers to investigate vegetation dynamics in forests. The package allows users to integrate dynamics across three different time scales: from short‑term physiological responses to  long‑term evolutionary development. www.iiasa.ac.at/news/foresteco-16 Pressure builds on global water  supply If current trends continue, domestic and industrial water demand would more than double by the year 2050, and continue to increase after that, according to a new study. The study introduces the first scenarios from the IIASA Water Futures and Solutions initiative, a multi‑year interdisciplinary research project focusing on global water challenges and solutions, and explains the methodology and  models used by the initiative. www.iiasa.ac.at/news/watersupply-16 Iran’s great salt lake at risk Climate change is likely to worsen the situation of Iran’s drought‑stricken Lake Urmia—once the second‑largest salt lake in the world. The  water level in the lake has already declined by 80% over the last 20 years, due to increased agricultural demand as well as increasing temperatures. The new study shows that without regional action to preserve water and global action to limit climate change, the lake’s future is very uncertain. www.iiasa.ac.at/news/urmia-16
zurück zum  Buch options, Band summer 2016"
options Band summer 2016