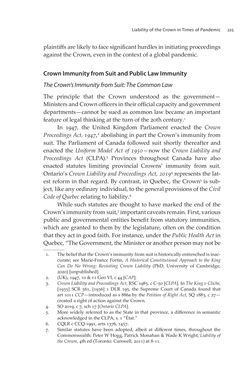 225Liability of the Crown in Times of Pandemic plaintiffs are likely to face significant hurdles in initiating proceedings against the Crown, even in the context of a global pandemic. Crown Immunity from Suit and Public Law Immunity The Crown’s Immunity from Suit: The Common Law The principle that the Crown understood as the government— Ministers and Crown officers in their official capacity and government departments—cannot be sued as common law became an important feature of legal thinking at the turn of the 20th century.1 In 1947, the United Kingdom Parliament enacted the Crown Proceedings  Act,  1947,2 abolishing in part the Crown’s immunity from suit. The Parliament of Canada followed suit shortly thereafter and enacted the Uniform  Model  Act  of  1950—now the Crown  Liability  and  Proceedings  Act (CLPA).3 Provinces throughout Canada have also enacted statutes limiting provincial Crowns’ immunity from suit. Ontario’s Crown  Liability  and  Proceedings  Act,  20194 represents the lat- est reform in that regard. By contrast, in Quebec, the Crown5 is sub- ject, like any ordinary individual, to the general provisions of the Civil Code of Quebec relating to liability.6 While such statutes are thought to have marked the end of the Crown’s immunity from suit,7 important caveats remain. First, various public and governmental entities benefit from statutory immunities, which are granted to them by the legislature, often on the condition that they act in good faith. For instance, under the Public Health Act in Quebec, “The Government, the Minister or another person may not be 1. The belief that the Crown’s immunity from suit is historically entrenched is inac- curate; see Marie-France Fortin, A  Historical  Constitutional  Approach  to  the  King  Can  Do  No  Wrong:  Revisiting  Crown  Liability (PhD, University of Cambridge, 2020) [unpublished]. 2. (UK), 1947, 10 & 11 Geo VI, c 44 [CAP]. 3. Crown  Liability  and  Proceedings  Act, RSC 1985, c C-50 [CLPA]. In The  King  v  Cliche, [1935] SCR 561, [1936] 1 DLR 195, the Supreme Court of Canada found that art 1011 CCP—introduced as s 886a by the Petition  of  Right  Act, SQ 1883, c 27— created a right of action against the Crown. 4. SO 2019, c 7, sch 17 [Ontario CLPA]. 5. More widely referred to as the State in that province, a difference in semantic acknowledged in the CLPA, s. 1 “État.” 6. CQLR c CCQ-1991, arts 1376, 1457. 7. Similar statutes have been adopted, albeit at different times, throughout the Commonwealth: Peter W Hogg, Patrick Monahan & Wade K Wright, Liability  of  the Crown, 4th ed (Toronto: Carswell, 2011) at 8-11.
zurück zum  Buch VULNERABLE - The Law, Policy and Ethics of COVID-19"
VULNERABLE The Law, Policy and Ethics of COVID-19