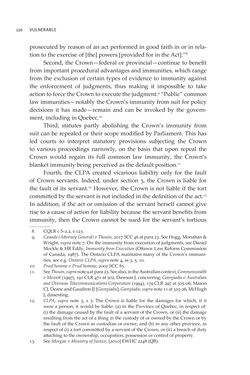 VULNERABLE226 prosecuted by reason of an act performed in good faith in or in rela- tion to the exercise of [the] powers [provided for in the Act].”8 Second, the Crown—federal or provincial—continue to benefit from important procedural advantages and immunities, which range from the exclusion of certain types of evidence to immunity against the enforcement of judgments, thus making it impossible to take action to force the Crown to execute the judgment.9 “Public” common law immunities—notably the Crown’s immunity from suit for policy decisions it has made—remain and can be invoked by the govern- ment, including in Quebec.10 Third, statutes partly abolishing the Crown’s immunity from suit can be repealed or their scope modified by Parliament. This has led courts to interpret statutory provisions subjecting the Crown to various proceedings narrowly, on the basis that upon repeal the Crown would regain its full common law immunity, the Crown’s blanket immunity being perceived as the default position.11 Fourth, the CLPA created vicarious liability only for the fault of Crown servants. Indeed, under section 3, the Crown is liable for the fault of its servant.12 However, the Crown is not liable if the tort committed by the servant is not included in the definition of the act.13 In addition, if the act or omission of the servant herself cannot give rise to a cause of action for liability because the servant benefits from immunity, then the Crown cannot be sued for the servant’s tortious 8. CQLR c S-2.2, s 123. 9. Canada  (Attorney  General)  v  Thouin, 2017 SCC 46 at para 23. See Hogg, Monahan & Wright, supra note 7. On the immunity from execution of judgments, see Daniel Mockle & HR Eddy, Immunity  from  Execution (Ottawa: Law Reform Commission of Canada, 1987). The Ontario CLPA maintains many of the Crown’s immuni- ties, see e.g. Ontario CLPA, supra note 4, ss 3, 5, 10. 10. Prud’homme  v  Prud’homme, 2002 SCC 85. 11. See Thouin, supra note 9 at para 23. See also, in the Australian context, Commonwealth v  Mewett (1997), 191 CLR 471 at 502, Dawson J, concurring; Georgiadis  v  Australian  and Overseas Telecommunications Corporation (1994), 179 CLR 297 at 305-06; Mason CJ, Deane and Gaudron JJ [Georgiadis]; Georgiadis, supra note 11 at 325-26, McHugh J, dissenting. 12. CLPA, supra note 3, s 3: The Crown is liable for the damages for which, if it were a person, it would be liable: (a) in the Province of Quebec, in respect of: (i) the damage caused by the fault of a servant of the Crown, or (ii) the damage resulting from the act of a thing in the custody of or owned by the Crown or by the fault of the Crown as custodian or owner; and (b) in any other province, in respect of (i) a tort committed by a servant of the Crown, or (ii) a breach of duty attaching to the ownership, occupation, possession or control of property. 13. See Morgan  v  Ministry  of  Justice, [2010] EWHC 2248 (QB).
zurück zum  Buch VULNERABLE - The Law, Policy and Ethics of COVID-19"
VULNERABLE The Law, Policy and Ethics of COVID-19