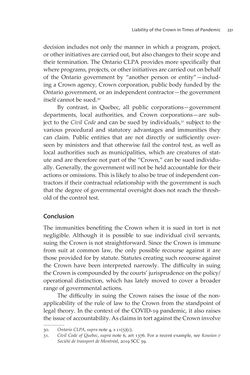 231Liability of the Crown in Times of Pandemic decision includes not only the manner in which a program, project, or other initiatives are carried out, but also changes to their scope and their termination. The Ontario CLPA provides more specifically that where programs, projects, or other initiatives are carried out on behalf of the Ontario government by “another person or entity”—includ- ing a Crown agency, Crown corporation, public body funded by the Ontario government, or an independent contractor—the government itself cannot be sued.30 By contrast, in Quebec, all public corporations—government departments, local authorities, and Crown corporations—are sub- ject to the Civil Code and can be sued by individuals,31 subject to the various procedural and statutory advantages and immunities they can claim. Public entities that are not directly or sufficiently over- seen by ministers and that otherwise fail the control test, as well as local authorities such as municipalities, which are creatures of stat- ute and are therefore not part of the “Crown,” can be sued individu- ally. Generally, the government will not be held accountable for their actions or omissions. This is likely to also be true of independent con- tractors if their contractual relationship with the government is such that the degree of governmental oversight does not reach the thresh- old of the control test. Conclusion The immunities benefiting the Crown when it is sued in tort is not negligible. Although it is possible to sue individual civil servants, suing the Crown is not straightforward. Since the Crown is immune from suit at common law, the only possible recourse against it are those provided for by statute. Statutes creating such recourse against the Crown have been interpreted narrowly. The difficulty in suing the Crown is compounded by the courts’ jurisprudence on the policy/ operational distinction, which has lately moved to cover a broader range of governmental actions. The difficulty in suing the Crown raises the issue of the non- applicability of the rule of law to the Crown from the standpoint of legal theory. In the context of the COVID-19 pandemic, it also raises the issue of accountability. As claims in tort against the Crown involve 30. Ontario CLPA, supra note 4, s 11(5)(c). 31. Civil Code of Quebec, supra note 6, art 1376. For a recent example, see Kosoian v Société de transport de Montréal, 2019 SCC 59.
zurück zum  Buch VULNERABLE - The Law, Policy and Ethics of COVID-19"
VULNERABLE The Law, Policy and Ethics of COVID-19