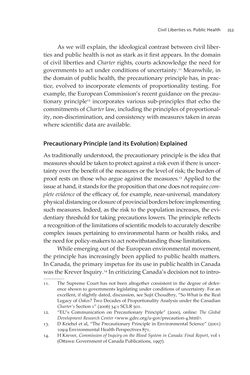 253Civil Liberties vs. Public Health As we will explain, the ideological contrast between civil liber- ties and public health is not as stark as it first appears. In the domain of civil liberties and Charter rights, courts acknowledge the need for governments to act under conditions of uncertainty.11 Meanwhile, in the domain of public health, the precautionary principle has, in prac- tice, evolved to incorporate elements of proportionality testing. For example, the European Commission’s recent guidance on the precau- tionary principle12 incorporates various sub-principles that echo the commitments of Charter law, including the principles of proportional- ity, non-discrimination, and consistency with measures taken in areas where scientific data are available. Precautionary Principle (and its Evolution) Explained As traditionally understood, the precautionary principle is the idea that measures should be taken to protect against a risk even if there is uncer- tainty over the benefit of the measures or the level of risk; the burden of proof rests on those who argue against the measures.13 Applied to the issue at hand, it stands for the proposition that one does not require com- plete evidence of the efficacy of, for example, near-universal, mandatory physical distancing or closure of provincial borders before implementing such measures. Indeed, as the risk to the population increases, the evi- dentiary threshold for taking precautions lowers. The principle reflects a recognition of the limitations of scientific models to accurately describe complex issues pertaining to environmental harm or health risks, and the need for policy-makers to act notwithstanding those limitations. While emerging out of the European environmental movement, the principle has increasingly been applied to public health matters. In Canada, the primary impetus for its use in public health in Canada was the Krever Inquiry.14 In criticizing Canada’s decision not to intro- 11. The Supreme Court has not been altogether consistent in the degree of defer- ence shown to governments legislating under conditions of uncertainty. For an excellent, if slightly dated, discussion, see Sujit Choudhry, “So What is the Real Legacy of Oakes? Two Decades of Proportionality Analysis under the Canadian Charter’s  Section 1” (2006) 34:1 SCLR 501. 12. “EU’s Communication on Precautionary Principle” (2000), online: The  Global  Development Research Center <www.gdrc.org/u-gov/precaution-4.html>. 13. D Kriebel et al, “The Precautionary Principle in Environmental Science” (2001) 109:9 Environmental Health Perspectives 871. 14. H Krever, Commission  of  Inquiry  on  the  Blood  System  in  Canada:  Final  Report, vol 1 (Ottawa: Government of Canada Publications, 1997).
zurück zum  Buch VULNERABLE - The Law, Policy and Ethics of COVID-19"
VULNERABLE The Law, Policy and Ethics of COVID-19