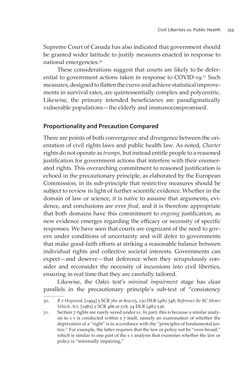 259Civil Liberties vs. Public Health Supreme Court of Canada has also indicated that government should be granted wider latitude to justify measures enacted in response to national emergencies.30 These considerations suggest that courts are likely to be defer- ential to government actions taken in response to COVID-19.31 Such measures, designed to flatten the curve and achieve statistical improve- ments in survival rates, are quintessentially complex and polycentric. Likewise, the primary intended beneficiaries are paradigmatically vulnerable populations—the elderly and immunocompromised. Proportionality and Precaution Compared There are points of both convergence and divergence between the ori- entation of civil rights laws and public health law. As noted, Charter rights do not operate as trumps, but instead entitle people to a reasoned justification for government actions that interfere with their enumer- ated rights. This overarching commitment to reasoned justification is echoed in the precautionary principle, as elaborated by the European Commission, in its sub-principle that restrictive measures should be subject to review in light of further scientific evidence. Whether in the domain of law or science, it is naïve to assume that arguments, evi- dence, and conclusions are ever final,  and it is therefore appropriate that both domains have this commitment to ongoing  justification, as new evidence emerges regarding the efficacy or necessity of specific responses. We have seen that courts are cognizant of the need to gov- ern under conditions of uncertainty and will defer to governments that make good-faith efforts at striking a reasonable balance between individual rights and collective societal interests. Governments can expect—and deserve—that deference when they scrupulously con- sider and reconsider the necessity of incursions into civil liberties, ensuring in real time that they are carefully tailored. Likewise, the Oakes test’s minimal impairment stage has clear parallels in the precautionary principle’s sub-test of “consistency 30. R  v  Heywood, [1994] 3 SCR 761 at 802-03, 120 DLR (4th) 348; Reference Re BC Motor Vehicle Act, [1985] 2 SCR 486 at 518, 24 DLR (4th) 536. 31. Section 7 rights are rarely saved under s1. In part, this is because a similar analy- sis to s 1 is conducted within s 7 itself, namely an examination of whether the deprivation of a “right” is in accordance with the “principles of fundamental jus- tice.” For example, the latter requires that the law or policy not be “over-broad,” which is similar to one part of the s 1 analysis that examines whether the law or policy is “minimally impairing.”
zurück zum  Buch VULNERABLE - The Law, Policy and Ethics of COVID-19"
VULNERABLE The Law, Policy and Ethics of COVID-19