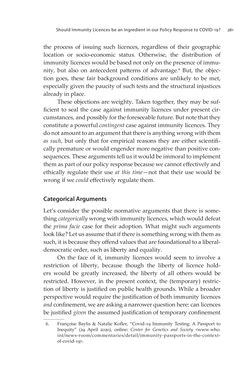 281Should Immunity Licences be an Ingredient in our Policy Response to COVID-19? the process of issuing such licences, regardless of their geographic location or socio-economic status. Otherwise, the distribution of immunity licences would be based not only on the presence of immu- nity, but also on antecedent patterns of advantage.6 But, the objec- tion goes, these fair background conditions are unlikely to be met, especially given the paucity of such tests and the structural injustices already in place. These objections are weighty. Taken together, they may be suf- ficient to seal the case against immunity licences under present cir- cumstances, and possibly for the foreseeable future. But note that they constitute a powerful contingent case against immunity licences. They do not amount to an argument that there is anything wrong with them as such, but only that for empirical reasons they are either scientifi- cally premature or would engender more negative than positive con- sequences. These arguments tell us it would be immoral to implement them as part of our policy response because we cannot effectively and ethically regulate their use at this time—not that their use would be wrong if we could effectively regulate them. Categorical Arguments Let’s consider the possible normative arguments that there is some- thing categorically  wrong with immunity licences, which would defeat the prima facie case for their adoption. What might such arguments look like? Let us assume that if there is something wrong with them as such, it is because they offend values that are foundational to a liberal- democratic order, such as liberty and equality. On the face of it, immunity licences would seem to involve a restriction of liberty, because though the liberty of licence hold- ers would be greatly increased, the liberty of all others would be restricted. However, in the present context, the (temporary) restric- tion of liberty is justified on public health grounds. While a broader perspective would require the justification of both immunity licences and confinement, we are asking a narrower question here: can licences be justified given the assumed justification of temporary confinement 6. Françoise Baylis & Natalie Kofler, “Covid-19 Immunity Testing: A Passport to Inequity” (29 April 2020), online: Center  for  Genetics  and  Society <www.who. int/news-room/commentaries/detail/immunity-passports-in-the-context- of-covid-19>.
zurück zum  Buch VULNERABLE - The Law, Policy and Ethics of COVID-19"
VULNERABLE The Law, Policy and Ethics of COVID-19