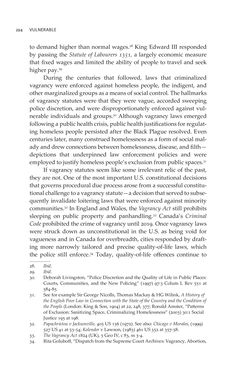 VULNERABLE294 to demand higher than normal wages.28 King Edward III responded by passing the Statute of Labourers 1351,  a largely economic measure that fixed wages and limited the ability of people to travel and seek higher pay.29 During the centuries that followed, laws that criminalized vagrancy were enforced against homeless people, the indigent, and other marginalized groups as a means of social control. The hallmarks of vagrancy statutes were that they were vague, accorded sweeping police discretion, and were disproportionately enforced against vul- nerable individuals and groups.30 Although vagrancy laws emerged following a public health crisis, public health justifications for regulat- ing homeless people persisted after the Black Plague resolved. Even centuries later, many construed homelessness as a form of social mal- ady and drew connections between homelessness, disease, and filth— depictions that underpinned law enforcement policies and were employed to justify homeless people’s exclusion from public spaces.31 If vagrancy statutes seem like some irrelevant relic of the past, they are not. One of the most important U.S. constitutional decisions that governs procedural due process arose from a successful constitu- tional challenge to a vagrancy statute—a decision that served to subse- quently invalidate loitering laws that were enforced against minority communities.32 In England and Wales, the Vagrancy  Act  still prohibits sleeping on public property and panhandling.33 Canada’s Criminal Code prohibited the crime of vagrancy until 2019. Once vagrancy laws were struck down as unconstitutional in the U.S. as being void for vagueness and in Canada for overbreadth, cities responded by draft- ing more narrowly tailored and precise quality-of-life laws, which the police still enforce.34 Today, quality-of-life offences continue to 28. Ibid. 29. Ibid. 30. Deborah Livingston, “Police Discretion and the Quality of Life in Public Places: Courts, Communities, and the New Policing” (1997) 97:3 Colum L Rev 551 at 584-85. 31. See for example Sir George Nicolls, Thomas Mackay & HG Wilink, A  History  of  the  English  Poor  Law  in  Connection  with  the  State  of  the  Country  and  the  Condition  of  the People (London: King & Son, 1904) at 22, 248, 377; Ronald Amster, “Patterns of Exclusion: Sanitizing Space, Criminalizing Homelessness” (2003) 30:1 Social Justice 195 at 198. 32. Papachristou v Jacksonville, 405 US 156 (1972). See also: Chicago  v  Morales, (1999) 527 US 41 at 53-54; Kolender v Lawson, (1983) 461 US 352 at 357-58. 33. The  Vagrancy  Act 1824 (UK), 5 Geo IV, c 83, ss 3-4. 34. Rita Goluboff, “Dispatch from the Supreme Court Archives: Vagrancy, Abortion,
zurück zum  Buch VULNERABLE - The Law, Policy and Ethics of COVID-19"
VULNERABLE The Law, Policy and Ethics of COVID-19