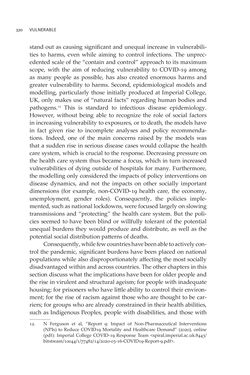 VULNERABLE320 stand out as causing significant and unequal increase in vulnerabili- ties to harms, even while aiming to control infections. The unprec- edented scale of the “contain and control” approach to its maximum scope, with the aim of reducing vulnerability to COVID-19 among as many people as possible, has also created enormous harms and greater vulnerability to harms. Second, epidemiological models and modelling, particularly those initially produced at Imperial College, UK, only makes use of “natural facts” regarding human bodies and pathogens.12 This is standard to infectious disease epidemiology. However, without being able to recognize the role of social factors in increasing vulnerability to exposures, or to death, the models have in fact given rise to incomplete analyses and policy recommenda- tions. Indeed, one of the main concerns raised by the models was that a sudden rise in serious disease cases would collapse the health care system, which is crucial to the response. Decreasing pressure on the health care system thus became a focus, which in turn increased vulnerabilities of dying outside of hospitals for many. Furthermore, the modelling only considered the impacts of policy interventions on disease dynamics, and not the impacts on other socially important dimensions (for example, non-COVID-19 health care, the economy, unemployment, gender roles). Consequently, the policies imple- mented, such as national lockdowns, were focused largely on slowing transmissions and “protecting” the health care system. But the poli- cies seemed to have been blind or willfully tolerant of the potential unequal burdens they would produce and distribute, as well as the potential social distribution patterns of deaths. Consequently, while few countries have been able to actively con- trol the pandemic, significant burdens have been placed on national populations while also disproportionately affecting the most socially disadvantaged within and across countries. The other chapters in this section discuss what the implications have been for older people and the rise in virulent and structural ageism; for people with inadequate housing; for prisoners who have little ability to control their environ- ment; for the rise of racism against those who are thought to be car- riers; for groups who are already constrained in their health abilities, such as Indigenous Peoples, people with disabilities, and those with 12. N Ferguson et al, “Report 9: Impact of Non-Pharmaceutical Interventions (NPIs) to Reduce COVID19 Mortality and Healthcare Demand” (2020), online (pdf): Imperial College COVID-19 Response Team <spiral.imperial.ac.uk:8443/ bitstream/10044/1/77482/14/2020-03-16-COVID19-Report-9.pdf>.
zurück zum  Buch VULNERABLE - The Law, Policy and Ethics of COVID-19"
VULNERABLE The Law, Policy and Ethics of COVID-19