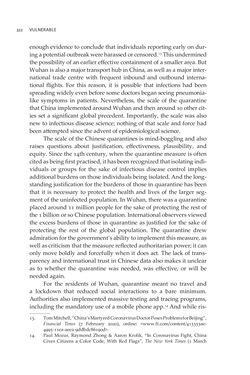 VULNERABLE322 enough evidence to conclude that individuals reporting early on dur- ing a potential outbreak were harassed or censored.13 This undermined the possibility of an earlier effective containment of a smaller area. But Wuhan is also a major transport hub in China, as well as a major inter- national trade centre with frequent inbound and outbound interna- tional flights. For this reason, it is possible that infections had been spreading widely even before some doctors began seeing pneumonia- like symptoms in patients. Nevertheless, the scale of the quarantine that China implemented around Wuhan and then around 10 other cit- ies set a significant global precedent. Importantly, the scale was also new to infectious disease science; nothing of that scale and force had been attempted since the advent of epidemiological science. The scale of the Chinese quarantines is mind-boggling and also raises questions about justification, effectiveness, plausibility, and equity. Since the 14th century, when the quarantine measure is often cited as being first practised, it has been recognized that isolating indi- viduals or groups for the sake of infectious disease control implies additional burdens on those individuals being isolated. And the long- standing justification for the burdens of those in quarantine has been that it is necessary to protect the health and lives of the larger seg- ment of the uninfected population. In Wuhan, there was a quarantine placed around 11 million people for the sake of protecting the rest of the 1 billion or so Chinese population. International observers viewed the excess burdens of those in quarantine as justified for the sake of protecting the rest of the global population. The quarantine drew admiration for the government’s ability to implement this measure, as well as criticism that the measure reflected authoritarian power; it can only move boldly and forcefully when it does act. The lack of trans- parency and international trust in Chinese data also makes it unclear as to whether the quarantine was needed, was effective, or will be needed again. For the residents of Wuhan, quarantine meant no travel and a lockdown that reduced social interactions to a bare minimum. Authorities also implemented massive testing and tracing programs, including the mandatory use of a mobile phone app.14 And while ris- 13. Tom Mitchell, “China’s Martyred Coronavirus Doctor Poses Problems for Beijing”, Financial Times (7 February 2020), online: <www.ft.com/content/413353ae- 4995-11ea-aee2-9ddbdc86190d>. 14. Paul Mozur, Raymond Zhong & Aaron Krolik, “In Coronavirus Fight, China Gives Citizens a Color Code, With Red Flags”, The New York Times (1 March
zurück zum  Buch VULNERABLE - The Law, Policy and Ethics of COVID-19"
VULNERABLE The Law, Policy and Ethics of COVID-19