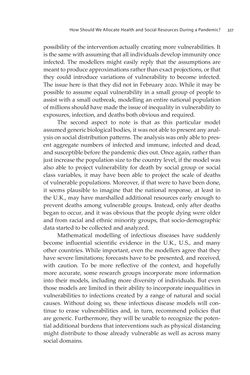 327How Should We Allocate Health and Social Resources During a Pandemic? possibility of the intervention actually creating more vulnerabilities. It is the same with assuming that all individuals develop immunity once infected. The modellers might easily reply that the assumptions are meant to produce approximations rather than exact projections, or that they could introduce variations of vulnerability to become infected. The issue here is that they did not in February 2020. While it may be possible to assume equal vulnerability in a small group of people to assist with a small outbreak, modelling an entire national population of millions should have made the issue of inequality in vulnerability to exposures, infection, and deaths both obvious and required. The second aspect to note is that as this particular model assumed generic biological bodies, it was not able to present any anal- ysis on social distribution patterns. The analysis was only able to pres- ent aggregate numbers of infected and immune, infected and dead, and susceptible before the pandemic dies out. Once again, rather than just increase the population size to the country level, if the model was also able to project vulnerability for death by social group or social class variables, it may have been able to project the scale of deaths of vulnerable populations. Moreover, if that were to have been done, it seems plausible to imagine that the national response, at least in the U.K., may have marshalled additional resources early enough to prevent deaths among vulnerable groups. Instead, only after deaths began to occur, and it was obvious that the people dying were older and from racial and ethnic minority groups, that socio-demographic data started to be collected and analyzed. Mathematical modelling of infectious diseases have suddenly become influential scientific evidence in the U.K., U.S., and many other countries. While important, even the modellers agree that they have severe limitations; forecasts have to be presented, and received, with caution. To be more reflective of the context, and hopefully more accurate, some research groups incorporate more information into their models, including more diversity of individuals. But even those models are limited in their ability to incorporate inequalities in vulnerabilities to infections created by a range of natural and social causes. Without doing so, these infectious disease models will con- tinue to erase vulnerabilities and, in turn, recommend policies that are generic. Furthermore, they will be unable to recognize the poten- tial additional burdens that interventions such as physical distancing might distribute to those already vulnerable as well as across many social domains.
zurück zum  Buch VULNERABLE - The Law, Policy and Ethics of COVID-19"
VULNERABLE The Law, Policy and Ethics of COVID-19