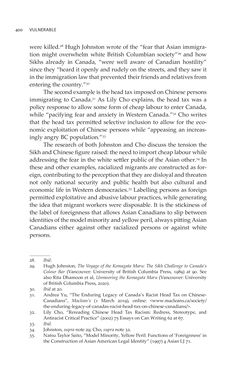 VULNERABLE400 were killed.28 Hugh Johnston wrote of the “fear that Asian immigra- tion might overwhelm white British Columbian society”29 and how Sikhs already in Canada, “were well aware of Canadian hostility” since they “heard it openly and rudely on the streets, and they saw it in the immigration law that prevented their friends and relatives from entering the country.”30 The second example is the head tax imposed on Chinese persons immigrating to Canada.31 As Lily Cho explains, the head tax was a policy response to allow some form of cheap labour to enter Canada, while “pacifying fear and anxiety in Western Canada.”32 Cho writes that the head tax permitted selective inclusion to allow for the eco- nomic exploitation of Chinese persons while “appeasing an increas- ingly angry BC population.”33 The research of both Johnston and Cho discuss the tension the Sikh and Chinese figure raised: the need to import cheap labour while addressing the fear in the white settler public of the Asian other.34 In these and other examples, racialized migrants are constructed as for- eign, contributing to the perception that they are disloyal and threaten not only national security and public health but also cultural and economic life in Western democracies.35 Labelling persons as foreign permitted exploitative and abusive labour practices, while generating the idea that migrant workers were disposable. It is the stickiness of the label of foreignness that allows Asian Canadians to slip between identities of the model minority and yellow peril, always pitting Asian Canadians either against other racialized persons or against white persons. 28. Ibid. 29. Hugh Johnston, The  Voyage  of  the  Komagata  Maru:  The  Sikh  Challenge  to  Canada’s  Colour Bar (Vancouver: University of British Columbia Press, 1989) at 90. See also Rita Dhamoon et al, Unmooring  the  Komagata  Maru (Vancouver: University of British Columbia Press, 2020). 30. Ibid at 20. 31. Andrea Yu, “The Enduring Legacy of Canada’s Racist Head Tax on Chinese- Canadians”, Maclean’s (1 March 2019), online: <www.macleans.ca/society/ the-enduring-legacy-of-canadas-racist-head-tax-on-chinese-canadians/>. 32. Lily Cho, “Rereading Chinese Head Tax Racism: Redress, Stereotype, and Antiracist Critical Practice” (2002) 75 Essays on Can Writing 62 at 67. 33. Ibid. 34. Johnston, supra note 29; Cho, supra note 32. 35. Natsu Taylor Saito, “Model Minority, Yellow Peril: Functions of ‘Foreignness’ in the Construction of Asian American Legal Identity” (1997) 4 Asian LJ 71.
zurück zum  Buch VULNERABLE - The Law, Policy and Ethics of COVID-19"
VULNERABLE The Law, Policy and Ethics of COVID-19