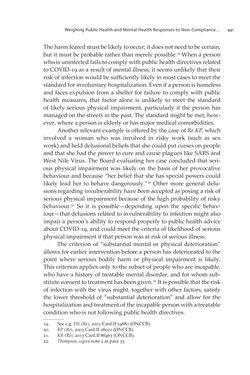 441Weighing Public Health and Mental Health Responses to Non-Compliance… The harm feared must be likely to occur; it does not need to be certain, but it must be probable rather than merely possible.19 When a person who is uninfected fails to comply with public health directives related to COVID-19 as a result of mental illness, it seems unlikely that their risk of infection would be sufficiently likely in most cases to meet the standard for involuntary hospitalization. Even if a person is homeless and faces expulsion from a shelter for failure to comply with public health measures, that factor alone is unlikely to meet the standard of likely serious physical impairment, particularly if the person has managed on the streets in the past. The standard might be met, how- ever, where a person is elderly or has major medical comorbidities. Another relevant example is offered by the case of Re KP, which involved a woman who was involved in risky work (such as sex work) and held delusional beliefs that she could put curses on people and that she had the power to cure and cause plagues like SARS and West Nile Virus. The Board evaluating her case concluded that seri- ous physical impairment was likely on the basis of her provocative behaviour and because “her belief that she has special powers could likely lead her to behave dangerously.”20 Other more general delu- sions regarding invulnerability have been accepted as posing a risk of serious physical impairment because of the high probability of risky behaviour.21 So it is possible—depending upon the specific behav- iour—that delusions related to invulnerability to infection might also impair a person’s ability to respond properly to public health advice about COVID-19, and could meet the criteria of likelihood of serious physical impairment if that person was at risk of serious illness. The criterion of “substantial mental or physical deterioration” allows for earlier intervention before a person has deteriorated to the point where serious bodily harm or physical impairment is likely. This criterion applies only to the subset of people who are incapable, who have a history of treatable mental disorder, and for whom sub- stitute consent to treatment has been given.22 It is possible that the risk of infection with the virus might, together with other factors, satisfy the lower threshold of “substantial deterioration” and allow for the hospitalization and treatment of the incapable person with a treatable condition who is not following public health directives. 19. See e.g. DE (Re), 2003 CanLII 54880 (ONCCB). 20. KP (Re), 2003 CanLII 28021 (ONCCB). 21. KR (Re), 2013 CanLII 86463 (ONCCB). 22. Thompson, supra note 2 at para 35.
zurück zum  Buch VULNERABLE - The Law, Policy and Ethics of COVID-19"
VULNERABLE The Law, Policy and Ethics of COVID-19