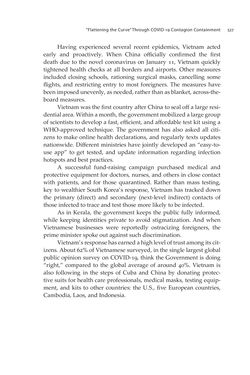 527“Flattening the Curve” Through COVID-19 Contagion Containment Having experienced several recent epidemics, Vietnam acted early and proactively. When China officially confirmed the first death due to the novel coronavirus on January 11, Vietnam quickly tightened health checks at all borders and airports. Other measures included closing schools, rationing surgical masks, cancelling some flights, and restricting entry to most foreigners. The measures have been imposed unevenly, as needed, rather than as blanket, across-the- board measures. Vietnam was the first country after China to seal off a large resi- dential area. Within a month, the government mobilized a large group of scientists to develop a fast, efficient, and affordable test kit using a WHO-approved technique. The government has also asked all citi- zens to make online health declarations, and regularly texts updates nationwide. Different ministries have jointly developed an “easy-to- use app” to get tested, and update information regarding infection hotspots and best practices. A successful fund-raising campaign purchased medical and protective equipment for doctors, nurses, and others in close contact with patients, and for those quarantined. Rather than mass testing, key to wealthier South Korea’s response, Vietnam has tracked down the primary (direct) and secondary (next-level indirect) contacts of those infected to trace and test those more likely to be infected. As in Kerala, the government keeps the public fully informed, while keeping identities private to avoid stigmatization. And when Vietnamese businesses were reportedly ostracizing foreigners, the prime minister spoke out against such discrimination. Vietnam’s response has earned a high level of trust among its cit- izens. About 62% of Vietnamese surveyed, in the single largest global public opinion survey on COVID-19, think the Government is doing “right,” compared to the global average of around 40%. Vietnam is also following in the steps of Cuba and China by donating protec- tive suits for health care professionals, medical masks, testing equip- ment, and kits to other countries: the U.S., five European countries, Cambodia, Laos, and Indonesia.
zurück zum  Buch VULNERABLE - The Law, Policy and Ethics of COVID-19"
VULNERABLE The Law, Policy and Ethics of COVID-19