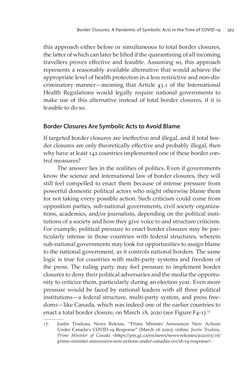 563Border Closures: A Pandemic of Symbolic Acts in the Time of COVID-19 this approach either before or simultaneous to total border closures, the latter of which can later be lifted if the quarantining of all incoming travellers proves effective and feasible. Assuming so, this approach represents a reasonably available alternative that would achieve the appropriate level of health protection in a less restrictive and non-dis- criminatory manner—meaning that Article 43.1 of the International Health Regulations would legally require national governments to make use of this alternative instead of total border closures, if it is feasible to do so. Border Closures Are Symbolic Acts to Avoid Blame If targeted border closures are ineffective and illegal, and if total bor- der closures are only theoretically effective and probably illegal, then why have at least 142 countries implemented one of these border con- trol measures? The answer lies in the realities of politics. Even if governments know the science and international law of border closures, they will still feel compelled to enact them because of intense pressure from powerful domestic political actors who might otherwise blame them for not taking every possible action. Such criticism could come from opposition parties, sub-national governments, civil society organiza- tions, academics, and/or journalists, depending on the political insti- tutions of a society and how they give voice to and structure criticism. For example, political pressure to enact border closures may be par- ticularly intense in those countries with federal structures, wherein sub-national governments may look for opportunities to assign blame to the national government, as it controls national borders. The same logic is true for countries with multi-party systems and freedom of the press. The ruling party may feel pressure to implement border closures to deny their political adversaries and the media the opportu- nity to criticize them, particularly during an election year. Even more pressure would be faced by national leaders with all three political institutions—a federal structure, multi-party system, and press free- doms—like Canada, which was indeed one of the earlier countries to enact a total border closure, on March 18, 2020 (see Figure F4-1).17 17. Justin Trudeau, News Release, “Prime Minister Announces New Actions Under Canada’s COVID-19 Response” (March 16 2020), online: Justin Trudeau, Prime Minister of Canada <https://pm.gc.ca/en/news/news-releases/2020/03/16/ prime-minister-announces-new-actions-under-canadas-covid-19-response>.
zurück zum  Buch VULNERABLE - The Law, Policy and Ethics of COVID-19"
VULNERABLE The Law, Policy and Ethics of COVID-19