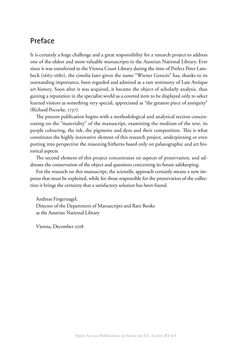 Preface It is certainly a huge challenge and a great responsibility for a research project to address one of the oldest and most valuable manuscripts in the Austrian National Library. Ever since it was transferred to the Vienna Court Library during the time of Prefect Peter Lam- beck (1663–1680), the cimelia later given the name “Wiener Genesis” has, thanks to its outstanding importance, been regarded and admired as a rare testimony of Late Antique art history. Soon after it was acquired, it became the object of scholarly analysis, thus gaining a reputation in the specialist world as a coveted item to be displayed only to select learned visitors as something very special, appreciated as “the greatest piece of antiquity” (Richard Pococke, 1737). The present publication begins with a methodological and analytical section concen- trating on the “materiality” of the manuscript, examining the medium of the text, its purple colouring, the ink, the pigments and dyes and their composition. This is what constitutes the highly innovative element of this research project, underpinning or even putting into perspective the reasoning hitherto based only on palaeographic and art his- torical aspects. The second element of this project concentrates on aspects of preservation, and ad- dresses the conservation of the object and questions concerning its future safekeeping. For the research on this manuscript, the scientific approach certainly means a new im- petus that must be exploited, while for those responsible for the preservation of the collec- tion it brings the certainty that a satisfactory solution has been found. Andreas Fingernagel, Director of the Department of Manuscripts and Rare Books at the Austrian National Library Vienna, December 2018 Open-Access-Publikation im Sinne der CC-Lizenz BY 4.0
zurück zum  Buch The Vienna Genesis - Material analysis and conservation of a Late Antique illuminated manuscript on purple parchment"
The Vienna Genesis Material analysis and conservation of a Late Antique illuminated manuscript on purple parchment