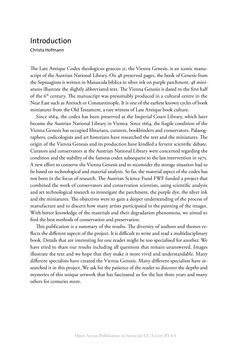 Introduction Christa Hofmann The Late Antique Codex theologicus graecus 31, the Vienna Genesis, is an iconic manu- script of the Austrian National Library. On 48 preserved pages, the book of Genesis from the Septuaginta is written in Maiuscula biblica in silver ink on purple parchment. 48 mini- atures illustrate the slightly abbreviated text. The Vienna Genesis is dated to the first half of the 6th century. The manuscript was presumably produced in a cultural centre in the Near East such as Antioch or Constantinople. It is one of the earliest known cycles of book miniatures from the Old Testament, a rare witness of Late Antique book culture. Since 1664, the codex has been preserved at the Imperial Court Library, which later became the Austrian National Library in Vienna. Since 1664, the fragile condition of the Vienna Genesis has occupied librarians, curators, bookbinders and conservators. Palaeog- raphers, codicologists and art historians have researched the text and the miniatures. The origin of the Vienna Genesis and its production have kindled a fervent scientific debate. Curators and conservators at the Austrian National Library were concerned regarding the condition and the stability of the famous codex subsequent to the last intervention in 1975. A new effort to conserve the Vienna Genesis and to reconsider the storage situation had to be based on technological and material analysis. So far, the material aspect of the codex has not been in the focus of research. The Austrian Science Fund FWF funded a project that combined the work of conservators and conservation scientists, using scientific analysis and art technological research to investigate the parchment, the purple dye, the silver ink and the miniatures. The objectives were to gain a deeper understanding of the process of manufacture and to discern how many artists participated in the painting of the images. With better knowledge of the materials and their degradation phenomena, we aimed to find the best methods of conservation and preservation. This publication is a summary of the results. The diversity of authors and themes re- flects the different aspects of the project. It is difficult to write and read a multidisciplinary book. Details that are interesting for one reader might be too specialised for another. We have tried to share our results including all questions that remain unanswered. Images illustrate the text and we hope that they make it more vivid and understandable. Many different specialists have created the Vienna Genesis. Many different specialists have re- searched it in this project. We ask for the patience of the reader to discover the depths and mysteries of this unique artwork that has fascinated us for the last three years and many others for centuries more. Open-Access-Publikation im Sinne der CC-Lizenz BY 4.0
zurück zum  Buch The Vienna Genesis - Material analysis and conservation of a Late Antique illuminated manuscript on purple parchment"
The Vienna Genesis Material analysis and conservation of a Late Antique illuminated manuscript on purple parchment