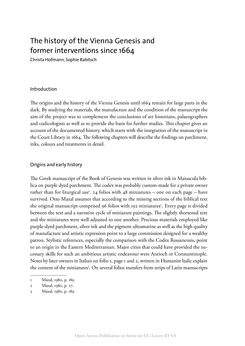 The history of the Vienna Genesis and former interventions since 1664 Christa Hofmann, Sophie Rabitsch Introduction The origins and the history of the Vienna Genesis until 1664 remain for large parts in the dark. By studying the materials, the manufacture and the condition of the manuscript the aim of the project was to complement the conclusions of art historians, palaeographers and codicologists as well as to provide the basis for further studies. This chapter gives an account of the documented history, which starts with the integration of the manuscript in the Court Library in 1664. The following chapters will describe the findings on parchment, inks, colours and treatments in detail. Origins and early history The Greek manuscript of the Book of Genesis was written in silver ink in Maiuscula bib- lica on purple dyed parchment. The codex was probably custom-made for a private owner rather than for liturgical use1. 24 folios with 48 miniatures – one on each page – have survived. Otto Mazal assumes that according to the missing sections of the biblical text the original manuscript comprised 96 folios with 192 miniatures2. Every page is divided between the text and a narrative cycle of miniature paintings. The slightly shortened text and the miniatures were well adjusted to one another. Precious materials employed like purple-dyed parchment, silver ink and the pigment ultramarine as well as the high quality of manufacture and artistic expression point to a large commission designed for a wealthy patron. Stylistic references, especially the comparison with the Codex Rossanensis, point to an origin in the Eastern Mediterranean. Major cities that could have provided the ne- cessary skills for such an ambitious artistic endeavour were Antioch or Constantinople. Notes by later owners in Italian on folio 1, page 1 and 2, written in Humanist Italic explain the content of the miniatures3. On several folios transfers from strips of Latin manuscripts 1 Mazal, 1980, p. 189. 2 Mazal, 1980, p. 27. 3 Mazal, 1980, p. 189. Open-Access-Publikation im Sinne der CC-Lizenz BY 4.0
zurück zum  Buch The Vienna Genesis - Material analysis and conservation of a Late Antique illuminated manuscript on purple parchment"
The Vienna Genesis Material analysis and conservation of a Late Antique illuminated manuscript on purple parchment