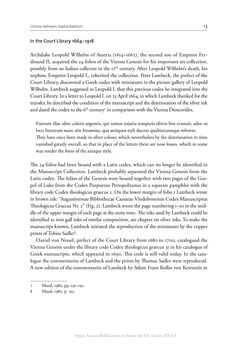 Christa Hofmann, Sophie Rabitsch 13 In the Court Library 1664–1918 Archduke Leopold Wilhelm of Austria (1614–1662), the second son of Emperor Fer- dinand II, acquired the 24 folios of the Vienna Genesis for his important art collection, possibly from an Italian collector in the 17th century. After Leopold Wilhelm’s death, his nephew, Emperor Leopold I., inherited the collection. Peter Lambeck, the prefect of the Court Library, discovered a Greek codex with miniatures in the picture gallery of Leopold Wilhelm. Lambeck suggested to Leopold I. that this precious codex be integrated into the Court Library. In a letter to Leopold I. on 23 April 1664, in which Lambeck thanked for the transfer, he described the condition of the manuscript and the deterioration of the silver ink and dated the codex to the 6th century7 in comparison with the Vienna Dioscorides. Fuerunt illae olim coloris argentis, qui tamen injuria temporis ubivis fere evanuit, adeo ut loco literarum nunc sint foramina, qua antiquos styli ductus qualitercumque referent. They have once been made in silver colour, which nevertheless by the deterioration in time vanished greatly overall, so that in place of the letters there are now losses, which in some way render the form of the antique style. The 24 folios had been bound with a Latin codex, which can no longer be identified in the Manuscript Collection. Lambeck probably separated the Vienna Genesis from the Latin codex. The folios of the Genesis were bound together with two pages of the Gos- pel of Luke from the Codex Purpureus Petropolitanus in a separate pamphlet with the library code Codex theologicus graecus 2. On the lower margin of folio 1 Lambeck wrote in brown ink: “Augustissimae Bibliothecae Caesarae Vindobonensis Codex Manuscriptus Theologicus Graecus Nr. 2” (Fig. 2). Lambeck wrote the page numbering 1–50 in the mid- dle of the upper margin of each page at the same time. The inks used by Lambeck could be identified as iron gall inks of similar composition, see chapter on silver inks. To make the manuscript known, Lambeck initiated the reproduction of the miniatures by the copper prints of Tobias Sadler8. Daniel von Nessel, prefect of the Court Library from 1680 to 1700, catalogued the Vienna Genesis under the library code Codex theologicus graecus 31 in his catalogue of Greek manuscripts, which appeared in 1690. This code is still valid today. In the cata- logue the commentaries of Lambeck and the prints by Thomas Sadler were reproduced. A new edition of the commentaries of Lambeck by Adam Franz Kollar von Keresztén in 7 Mazal, 1980, pp. 191–192. 8 Mazal, 1980, p. 193. Open-Access-Publikation im Sinne der CC-Lizenz BY 4.0
zurück zum  Buch The Vienna Genesis - Material analysis and conservation of a Late Antique illuminated manuscript on purple parchment"
The Vienna Genesis Material analysis and conservation of a Late Antique illuminated manuscript on purple parchment