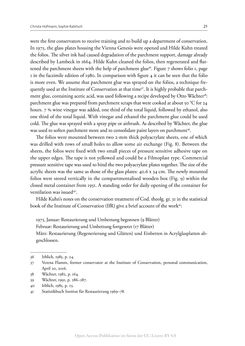 Christa Hofmann, Sophie Rabitsch 21 were the first conservators to receive training and to build up a department of conservation. In 1975, the glass plates housing the Vienna Genesis were opened and Hilde Kuhn treated the folios. The silver ink had caused degradation of the parchment support, damage already described by Lambeck in 1664. Hilde Kuhn cleaned the folios, then regenerated and flat- tened the parchment sheets with the help of parchment glue36. Figure 7 shows folio 1, page 1 in the facsimile edition of 1980. In comparison with figure 4 it can be seen that the folio is more even. We assume that parchment glue was sprayed on the folios, a technique fre- quently used at the Institute of Conservation at that time37. It is highly probable that parch- ment glue, containing acetic acid, was used following a recipe developed by Otto Wächter38: parchment glue was prepared from parchment scraps that were cooked at about 50 °C for 24 hours. 7 % wine vinegar was added, one third of the total liquid, followed by ethanol, also one third of the total liquid. With vinegar and ethanol the parchment glue could be used cold. The glue was sprayed with a spray pipe or airbrush. As described by Wächter, the glue was used to soften parchment more and to consolidate paint layers on parchment39. The folios were mounted between two 2-mm thick polyacrylate sheets, one of which was drilled with rows of small holes to allow some air exchange (Fig. 8). Between the sheets, the folios were fixed with two small pieces of pressure sensitive adhesive tape on the upper edges. The tape is not yellowed and could be a Filmoplast type. Commercial pressure sensitive tape was used to bind the two polyacrylate plates together. The size of the acrylic sheets was the same as those of the glass plates: 40.6 x 34 cm. The newly mounted folios were stored vertically in the compartmentalised wooden box (Fig. 9) within the closed metal container from 1951. A standing order for daily opening of the container for ventilation was issued40. Hilde Kuhn’s notes on the conservation treatment of Cod. theolg. gr. 31 in the statistical book of the Institute of Conservation (IfR) give a brief account of the work41: 1975, Januar: Restaurierung und Umbettung begonnen (9 Blätter) Februar: Restaurierung und Umbettung fortgesetzt (17 Blätter) März: Restaurierung (Regenerierung und Glätten) und Einbetten in Acrylglasplatten ab- geschlossen. 36 Irblich, 1985, p. 24. 37 Verena Flamm, former conservator at the Institute of Conservation, personal communication, April 20, 2016. 38 Wächter, 1982, p. 164. 39 Wächter, 1991, p. 286–287. 40 Irblich, 1985, p. 25. 41 Statistikbuch Institut für Restaurierung 1969–78. Open-Access-Publikation im Sinne der CC-Lizenz BY 4.0
zurück zum  Buch The Vienna Genesis - Material analysis and conservation of a Late Antique illuminated manuscript on purple parchment"
The Vienna Genesis Material analysis and conservation of a Late Antique illuminated manuscript on purple parchment